Chinese stocks have their worst day in nine years, bringing markets down worldwide.

The rout in Chinese stocks has rippled through markets worldwide. London's Daily Telegraph captured the sobering start to the new year with the headline "FTSE [Index] poised for worst stock market start this century as China-led malaise wipes £36bn off index."

The proximate causes of the market slump are twofold: First, China lowered the reference rate on its currency, the renminbi, to below Rmb6.5 per dollar for the first time in four years. Second, the Caixin/Markit China Manufacturing Purchasing Managers' Index (PMI) for December came in below expectations, at 48.2 (a reading below 50 indicates a contraction in activity). Today's reading marks 10 consecutive months of declining activity.

Yes, China's growth is slowing, but the quality of that growth (in other words more consumption and less debt-fuelled investment) is far more important, and the difficulties are more than discounted in cheap valuations.

Still, higher-quality (or rather, more balanced) growth or not, the slowdown is having global repercussions. The following graph shows China's contribution to global GDP, in percentage points, over the 50-year period spanning 1960 to 2010: 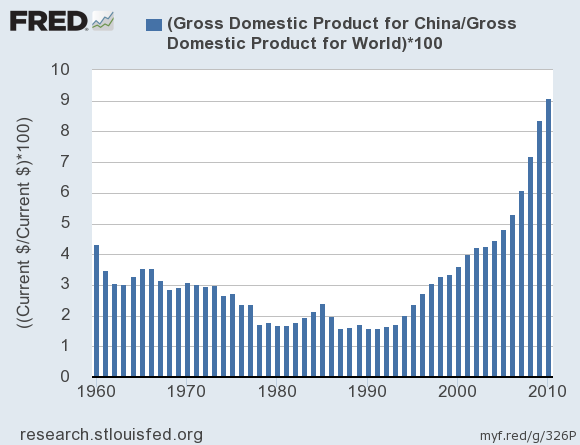 By this measure, China's weighting in the global economy grew nearly sixfold over the two decades ending in 2010, approaching a tenth. Despite slowing growth, that weighting has continued to increase in this decade.

UBS senior economic advisor George Magnus believes 2016 is the year in which politics will trump economics. In what looks like a prescient comment published on New Year's eve, he explains why the two are intertwined in China's case:

If China's economy is growing nearer 5 per cent, emerging market growth will be nearer 3.25-3.5 per cent [compared to 6.5% in 2011]. China has already shaken the world this year by mishandling the fall in its equity market and the mini-devaluation of the yuan in the summer. In the coming year, it will be important to see how China's leaders manage the negative consequences of the anti-corruption campaign for the economy, the ambitious but largely stalled economic reform programme, and the depreciation of the yuan. In any event, China's growth rate is still heading downwards. China's complex politics are both the cause and effect of what's going on in the economy.

In the wake of the global financial crisis, every investor became a Fed watcher. Perhaps we'll all be following the Central Committee of the Chinese Communist Party next.

Alex Dumortier, CFA has no position in any stocks mentioned. The Motley Fool has no position in any of the stocks mentioned. Try any of our Foolish newsletter services free for 30 days. We Fools may not all hold the same opinions, but we all believe that considering a diverse range of insights makes us better investors. The Motley Fool has a disclosure policy.