The behemoth of the retail industry invested in its employees and e-commerce at the expense of short-term profits and investor sentiment.

What: Shares of Wal-Mart (WMT 0.43%) slumped in 2015, falling by 28.6%, according to S&P Capital IQ data. Following investments in higher wages, pricing, and e-commerce, Wal-Mart slashed its earnings guidance for the full year, announcing in October that it expected earnings to decline through fiscal 2017. Investors weren't happy. 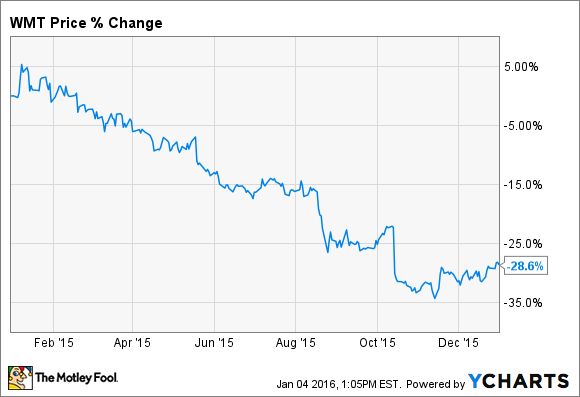 So what: Wal-Mart's earnings have been stagnating over the past few years, and the company announced a raft of changes in 2015 meant to drive long-term growth. In February, the company announced that its starting wage would be raised to $9 an hour in 2015, and raised further to $10 an hour in early 2016. In addition, Wal-Mart also announced new training programs and a more flexible scheduling system.

On top of these wage increases, Wal-Mart announced that it was ramping up its investments in e-commerce. Wal-Mart plans to invest $2 billion in its e-commerce business over the next two years, including the continued expansion of its online grocery service.

Wal-Mart expects to grow sales by 3% to 4% annually over the next four years, but these initiatives will hurt profitability. The company expects EPS to decline by as much as 9% in fiscal 2016, which ends in January, followed by another 6% to 12% decline in fiscal 2017. Strong growth will return in fiscal 2019 if all goes according to plan, but investors punished the stock severely during 2015 due to these profit-killing initiatives.

Now what: Wal-Mart is playing the long game, betting that higher wages will boost productivity and increase customer satisfaction. E-commerce, which has been little more than an afterthought for many entrenched brick-and-mortar retailers, will eventually be a major source of growth for Wal-Mart, but the company's investments will take time to pay off.

With shares of Wal-Mart at their lowest level since 2011, now may be the time for long-term investors to consider the stock. Only time will tell whether Wal-Mart's investments ultimately pay off, but after a rough 2015 erased nearly 30% of Wal-Mart's value, bargain hunters have something to think about.