The stock has suffered from months of steady decline. What happened, and what can investors expect going forward?

In its first year as a publicly traded company, Shake Shack (SHAK 3.83%) has been on a wild rollercoaster ride. After more than quadrupling in price to over $90 per share in May, the stock has since fallen all the way back to about $40, which is still twice the original IPO price. Lucky shareholders who got in on the ground floor are no doubt happy, but the remaining investors are still looking for a turnaround.

What has caused the downfall of Shake Shack, and is there hope in sight?

The story of fading stock gains
There are several likely culprits for the continued weak trading since the summer.

First, there has been an increase in the number of Shake Shack shares trading on the NYSE. Back in June, there were 5.9 million shares in float (or available for trading). As of this writing, that number is now nearly 6.9 million shares, an increase of 17%. This development alone would not negatively impact share prices, but part of the reason for the higher share count was the expiration of a 180 day lock-up provision back on July 29, allowing some early investors to sell their holdings in the company. 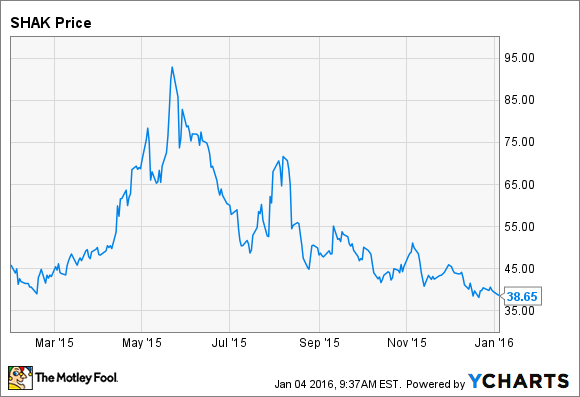 In light of that lockup expiration (and a meteoric rise of the stock), major Shake Shack investors divested themselves through secondary offerings: four million shares sold in mid-August and another 26 million shares announced in October. You can see the negative effect these deals had on the share price in the chart above.

More recently, the stock has continued to fall to new lows as hype around the company can no longer hold off serious concerns with its triple-digit valuation.

Shake Shack has been surprising analysts most quarters, outperforming on revenue, earnings, and same-store sales growth. The concern, however, is in those forward price-to-earnings and PEG numbers. Even after crashing from summertime highs, the stock still holds a huge premium to the broader restaurant sector. While the company is expected to enjoy robust bottom line growth in the years ahead, investors are paying handsomely for every piece of it.

The market seems to agree. Ever since the stock peaked in May, short interest has soared over 60% to 3.6 million shares as of Dec. 15, accounting for more than half of total float.

Future growth plans
So is there hope in sight? The company announced in the third quarter earnings report from November that it successfully completed its goal of opening 12 new U.S. "shacks" and will have opened five more "shacks" abroad before the end of fiscal 2015. Even this measured pace of store openings accounted for a roughly 25% increase in the number of total Shacks. The company has also confirmed its plan to enter four new U.S. markets in 2016, including Hollywood, Scottsdale, Phoenix, and Dallas.

These new locations are paying off for the company with revenue up 67% year-over-year in the third quarter. The same-store sales I mentioned previously increased 17% over the same period. The company also expects to see total revenue increase by about 25% in fiscal 2016.

One company, two stories
Shake Shack has had a memorable run as a public company -- its popular restaurants and market hype combined to create a captivating growth story. The stock price soared to reflect that story, only to completely reverse course as major shareholders tacitly admitted the valuation was too rich by selling out of their stakes.

Looking ahead, investors should see management continue to execute its growth strategy, but they should do it from afar as the stock is unlikely to bounce back until the valuation falls further to reasonable levels.

Nicholas Rossolillo has no position in any stocks mentioned. The Motley Fool has no position in any of the stocks mentioned. Try any of our Foolish newsletter services free for 30 days. We Fools may not all hold the same opinions, but we all believe that considering a diverse range of insights makes us better investors. The Motley Fool has a disclosure policy.