But for the dividend return, U.S. stocks were roughly flat on the year, but that still puts them ahead of other asset classes and other world markets.

Stocks essentially matched the meager return on bonds, with all three of the main asset classes basically flat on the year -- this despite the volatility in the third quarter, as China's stock market meltdown sent ripples through global markets in the third quarter: 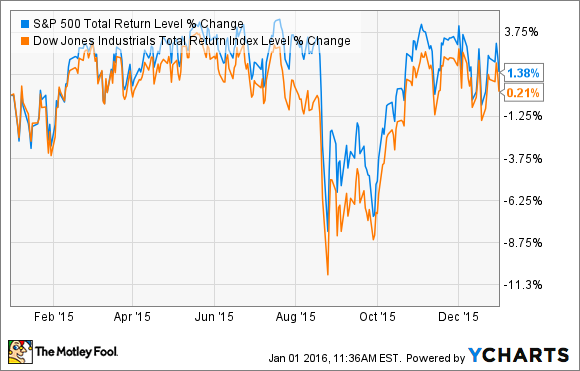 Furthermore, the five-year returns for both and stocks remain impressive -- perhaps a bit too much so, in fact.

Among individual stocks, a familiar name took the top spot:

S&P 500: biggest winner: Netflix: 134.4%
The fundamentals of the streaming content platform and producer continue to show solid momentum, but it's the increase in the stock's valuation multiples that powered Netflix (NFLX -2.25%) to the top spot: The price-to-earnings multiple went from 78 to 303, according to data from Bloomberg.

Netflix was also the best-performing stock in the index in 2013, when the shares quadrupled (up 297%).

More broadly, although the biotechnology sector suffered a drubbing in the third quarter -- the Nasdaq Biotechnology lost 27% peak-to-trough -- five of the top seven best-performing stocks in the Russell 3000 Index belonged to biotechnology companies.

(That result is not unique. In 2014, eight of the 11 top-returning stocks in the index were biotech stocks, with numbers that were even more spectacular than those of 2015.)

The biggest loser isn't all that surprising, either.

S&P 500, biggest loser: Chesapeake Energy Corporation (77%)
The severity of the rout in commodities prices surprised investors and executives in the energy and materials sectors in 2015, so it's no surprise to find Chesapeake Energy (CHKA.Q) at the bottom of the S&P 500 return ranking. Ten of the bottom 11 stocks were from those two sectors.

Broadening the landscape, here is how U.S. stocks performed relative to other markets:

Despite treading water, the U.S. stock market still managed to beat out both developed and emerging-market equities – even without the help of the dollar's strength. However, the margin of outperformance of U.S. stocks over the past five years is large enough that it looks unlikely to persist over the next five years, and the trend could well begin to reverse next year.

Alex Dumortier, CFA has no position in any stocks mentioned. The Motley Fool owns shares of and recommends Netflix. We Fools may not all hold the same opinions, but we all believe that considering a diverse range of insights makes us better investors. The Motley Fool has a disclosure policy.