We recap the most unsavory McDonald's Corp. headline from the year just concluded.

Recently, we reviewed McDonald's Corp.'s (NYSE: MCD) best headlines in 2015. I'd be remiss not to single out the news items that weren't as positive for the world's largest quick-service restaurant operator, and from an investor's standpoint, one headline stood out from others as McDonald's worst of the year. That distinction is awarded to the November 10th announcement, during McDonald's annual investor day, that it will add another $10 billion in borrowing to its balance sheet in the very near future.

This new debt will satisfy management's plans, issued the same day, to return over $30 billion to shareholders through dividends and share repurchases within the three-year period that concludes at year-end 2016. This represents a phenomenal increase in shareholder-oriented cash flows, almost doubling the $16.4 billion the company returned in the prior three-year period ending in 2013.

Why is McDonald's leveraging up on behalf of its investors?
McDonald's heightened shareholder return formula is apparently due to management's perceived need to maintain investor confidence. CFO Kevin Ozan noted in a November 10, 2015, press release that the incremental debt would result in a credit downgrade, but it wouldn't impact McDonald's ability to access capital globally for business purposes. Yet since the borrowing isn't tied to operations at all, the rationale boils down to keeping investors happy. In the release, Ozan alluded to as much:

This proactive move in our leverage metrics and credit ratings speaks to our willingness to make appropriate adjustments without limiting our ability to co-invest in the business with our franchisees to drive future long-term growth. Together with raising the dividend again this year, these actions reinforce our confidence in the Turnaround Plan.

As I discussed in late November, the debt plan did indeed result in a credit downgrade for McDonald's on the very day the company announced its intentions.

Interestingly, the fast-food behemoth started the year with an "A" rating from Standard & Poor's rating agency, the type of grade investors have traditionally associated with the "McDonald's" name. In May, the company announced its aim to return $8.5 billion to shareholders in 2015 in the form of dividends and share repurchases, a 33% leap (about $2 billion) over the prior year. This caused S&P to downgrade McDonald's credit rating to "A-." And when McDonald's revealed the $10 billion of anticipated borrowing, Standard & Poor's passed on its second downgrade of corporate debt, this time to "BBB+," still considered investment grade, but only three additional ratings downgrades away from "junk" bond status.

The need to nearly double shareholder-friendly actions during a time of declining business results is a response, at grand scale, to a problem that seems to have already receded: shareholder confidence. While most of McDonald's stock gains for 2015 occurred near year end after the company's positive third-quarter earnings release on October 22nd, shares had already climbed 10% up until then: 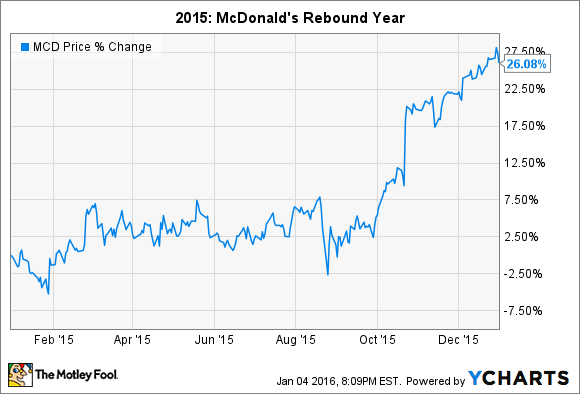 This debt decision, publicized well after management had time to consider that investors were enthusiastically lining up behind the company's turnaround, looks forward rather than back. It appears designed to neutralize in advance the type of shareholder activism we saw much of in 2015 among global multinational companies.

A common theme with deep-pocketed activist shareholders, which has been famously illustrated by activist investor Carl Icahn's investment in Apple Inc, is a demand that management teams use excess cash -- or leverage their balance sheets -- in order to reduce company shares outstanding. Hence McDonald's emphasis on ramping up buybacks, which is where most of the $10 billion will go, since dividends are covered by the company's free cash flow.

In theory, repurchasing significant amounts of shares reduces the pool over which company earnings are allocated. Over the long term, this should be positive for stock holders, enabling a dividend-issuing company to more easily increase its payouts (as fewer shares outstanding exist to distribute dividends among).

But in practice, in the short term, corporations of McDonald's size and resources, which can buy back literally billions worth of their own shares, possess a tool to prop up their stock prices. As fewer shares are left available on the open market, demand often increases, producing a degree of price support.

Whether this prop in any given organization's case is sustained, or revealed to be shaky as time goes on, depends entirely on company operations and investors' assessments of future cash flows. At some point, performance always tells. McDonald's management has possibly reasoned that keeping any potential investor agitators at bay while it executes on its turnaround is a preventative policy worth the credit risk. In other words, it's important to maintain the appearance of a price support bias while fundamentals improve.

And indeed, by my calculations, McDonald's is averaging $1.2 billion in free cash flow per quarter over the last seven quarters. So if conditions continue to brighten, the company shouldn't have too much trouble paying down portions of the issued debt.

Still, given the fact that investors have largely supported the MCD symbol over the last five years -- shares have averaged a surprisingly lucrative total annual return of 17.4% during the period -- it's hard to escape a nagging feeling that the promise and the debt were overkill: an unnecessary use of the company's resources, and a questionable reshaping of its capital structure.

Undoubtedly McDonald's is performing well on many fronts the outset of 2016, but with this tightening of financial flexibility, the company needs everything to move according to plan.

Asit Sharma has no position in any stocks mentioned. The Motley Fool owns shares of and recommends Apple. Try any of our Foolish newsletter services free for 30 days. We Fools may not all hold the same opinions, but we all believe that considering a diverse range of insights makes us better investors. The Motley Fool has a disclosure policy.