2016 is looking pretty good for clean energy stocks in general, and maybe for Clean Energy Fuels (CLNE 3.13%) stock in particular. New legislation extending tax credits on solar panels through 2016 and beyond has sent solar stocks soaring. Meanwhile in Clean Energy's domain -- natural gas fuel for vehicles -- 2016 will see excise taxes on liquid natural gas (LNG) fall dramatically. By one estimate, the cost of driving an LNG-fueled semi 100,000 miles cross country could fall as much as 40% in comparison to 2015.

This, one imagines, is why we saw Clean Energy Fuels stock upgraded this morning.

The upgrade
As reported on StreetInsider.com Tuesday morning, analysts at investment bank Raymond James have announced an upgrade in their rating on Clean Energy. Formerly rated underperform, the stock's now at market perform.

Although what that works out to is, in effect, no more than a neutral rating, it still represents a sharp turnaround for Raymond James, which had previously outperformed the S&P 500 by more than 80 percentage points after cutting Clean Energy to underperform in late 2013.

You can see how well that worked out for them in this chart: 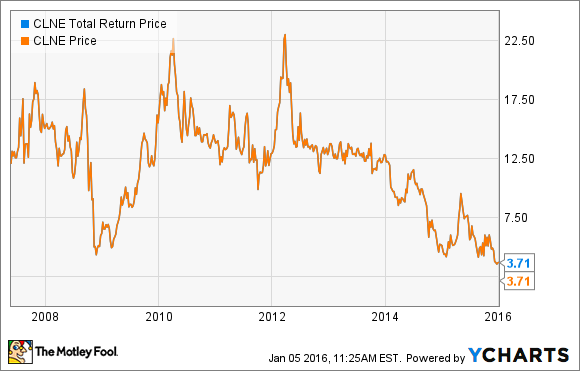 But now that the sell rating is gone, does this mean Clean Energy stock is ready to move higher?

Predicting the future
"It's tough to make predictions," said Yogi Berra, "especially about the future." One thing we can say for certain, though, is that Clean Energy shares are moving up sharply today in the wake of Raymond James' upgrade.

Another thing I'd predict, however, is that while Clean Energy stock is up today, there's a good chance it will go right back down. Here's why.

Let's go to the tape
Let's begin with our data from Motley Fool CAPS. According to our records, Raymond James has a pretty checkered past in the field of oil and gas stocks. Over the three years we've been tracking its performance, the analyst has scored under 23% for accuracy on picks in the oil, gas and consumable fuels sector, and barely 22% in energy equipment and services. Neither of which bodes particularly well for energy investors.

On the other hand, one stock that Raymond James has been consistently right about is Clean Energy, for which we have two recommendations on record:

Either way, though, it's important to understand that even if Raymond James does known Clean Energy really, really well -- according to its rating today, the stock's still a market performer at best. It's not yet a buy.

And why is it not a buy?
Indebted to the tune of more than $400 million, earning no profits and burning cash, Clean Energy stock simply isn't the most attractive candidate for a rebound. At last report, the company had reported GAAP losses of nearly $83 million for the past 12 months, alongside cash burn of more than $74 million.

And indeed, according to historical data from S&P Capital IQ, Clean Energy hasn't earned a full-year profit even once in the past 10 years -- nor generated any free cash flow, either. If Clean Energy hopes to outperform the market over the next 10 years, the company simply has to figure out a way to earn a profit from its business.

Now, maybe the reduction in excise taxes on natural gas fuel is the thing that makes that happen. I'm personally not convinced, because you also have to weigh the tax savings against the cost of converting trucks to run on LNG -- and also weigh the relative attractiveness of LNG versus diesel, in a market where oil costs under $40 a barrel. (Considering that Raymond James is only giving Clean Energy a neutral rating, I'd posit they're not entirely convinced, either).

The upshot for investors
Either way, though, time will tell. If and when we see Clean Energy's profits and cash flow numbers improving, there will be plenty of time -- and plenty more reason -- to buy the stock then. For now, it's just too soon.

Meantime, investors with a high tolerance for risk might want to take a look at another stock benefiting from tax shifts in Congress: Solar thin-film specialist First Solar (FSLR 5.04%). A clear beneficiary of the extension of the 30% tax credit on solar installations, First Solar is firmly profitable, with a P/E ratio of less than 13, and free cash flow-positive -- two attributes that Clean Energy Fuels lacks.

I'm personally leery of the stock's relatively weak free cash flow production, and also of analyst projections that profits are heading down. But Goldman Sachs just upgraded First Solar to buy, and says it's worth $100 a share.

Is Goldman Sachs right? Is First Solar a buy? You tell us -- on Motley Fool CAPS.

Fool contributor Rich Smith does not own shares of, nor is he short, any company named above. You can find him on Motley Fool CAPS, publicly pontificating under the handle TMFDitty, where he's currently ranked No. 298 out of more than 75,000 rated members.

The Motley Fool recommends Clean Energy Fuels. Try any of our Foolish newsletter services free for 30 days. We Fools may not all hold the same opinions, but we all believe that considering a diverse range of insights makes us better investors. The Motley Fool has a disclosure policy.