The memory market is going through another cyclical downturn as supply exceeds demand once again. That could change in 2016. 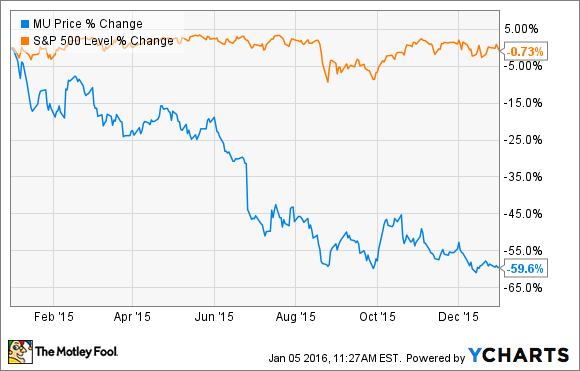 So what: The markets for NAND flash and DRAM memory chips had been stabilizing in recent years, but that trend reversed in 2015. Micron is back to fighting price wars with Samsung (NASDAQOTH: SSNLF) and SK Hynix (NASDAQOTH: HXSCL) as torrential chip supplies once again drown out meek end-market demand for these products.

Now what: Looking ahead, Micron is ramping up brand-new technologies that should reduce the manufacturing costs for both NAND and DRAM products. Moreover, the recently announced reorganization of Micron's Inotera partnership should add some $1.4 billion per year to Micron's operating cash flows.

Memory demand has been weak due to a struggling PC industry and slowing growth for mobile computing products. That can't last forever. In particular, mobile memory demand should balloon in the next five years as the Internet of Things continues to take off and cars become increasingly computerized.

Analysts overwhelmingly see the memory weakness bottoming out in the next two quarters, just as Micron's next-generation products become ready for commercial use and the Inotera deal starts paying off.

In other words, Micron's share price could double from here and the stock would still look cheap -- even before the expected market and manufacturing improvements of 2016 kick in.

Let's just say that I'm happy to own the stock today, despite the rough waters in the rearview mirror.

Anders Bylund owns shares of Micron Technology. The Motley Fool has no position in any of the stocks mentioned. Try any of our Foolish newsletter services free for 30 days.