Please ensure Javascript is enabled for purposes of website accessibility
Log In Help Join The Motley Fool
Free Article Join Over 1 Million Premium Members And Get More In-Depth Stock Guidance and Research
By Matthew DiLallo - Jan 5, 2016 at 10:52AM

No news, so blame it on oil price volatility.

What: Shares of Atwood Oceanics (ATW) were down by 10% at 10:45 a.m. ET on Monday. With no news surrounding the company, we can pretty much blame this sell-off on weak oil prices and overall market unease.

So what: The price of the global crude oil benchmark Brent was down nearly 2% by the mid-morning to roughly $36.50 per barrel. That price is well below the breakeven point of most offshore projects, with many requiring oil over $75 to be economic, suggesting that tough times remain ahead for offshore drillers like Atwood. That said, today's sell-off has hit Atwood Oceanic's stock harder than that of most of its peers -- it is down twice as much as those of Transocean (RIG 3.75%) and Noble Corporation (NEBLQ): 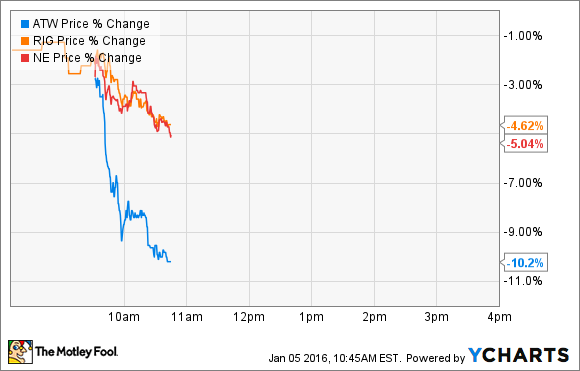 There's really no rational explanation for why Atwood is taking it on the chin today. The company has already addressed one of its major issues by agreeing to defer the delivery of its two newbuild ultra-deepwater drillships until 2017 and 2018, respectively. Furthermore, those delays will save it from paying the nearly $400 million in milestone payments it still owes until the ships are delivered. That positions it to retain a solid financial position so that it can continue to weather the current downturn.

In addition, Atwood hasn't faced some of the same headwinds of its peers. Unlike Noble and Transocean, it hasn't had its customers cancel drilling contracts early. Just last month, Noble lost a contract for a rig that was to drill in Alaska while Transocean lost contracts for rigs that had been working in Alaska and the Gulf of Mexico. Atwood hasn't been forced to follow Transocean's path and retire a lot of its older rigs because most of its rigs are still young. Instead, the company has extended a couple of its rig contracts, albeit at a lower dayrate. That said, even with those extensions, it has a number of rigs going off contract later this year, which is a concern given where oil prices are right now.

Now what: Shares of Atwood Oceanics will likely to continue to be volatile along with oil prices. That's because weaker oil prices make it much less likely that it will be able to even find contracts to replace those that expire this year. That would lead the company to idle more of its rigs until conditions begin to improve, which would in turn result in much lower earnings.