What: Shares of Calumet Specialty Products Partners (NASDAQ:CLMT) declined more than 21% in December. The stock move is in line with many other refiners that dropped last month following the announcement that Congress had lifted the ban on exporting domestic crude oil, but Calumet is in a somewhat different situation than most. 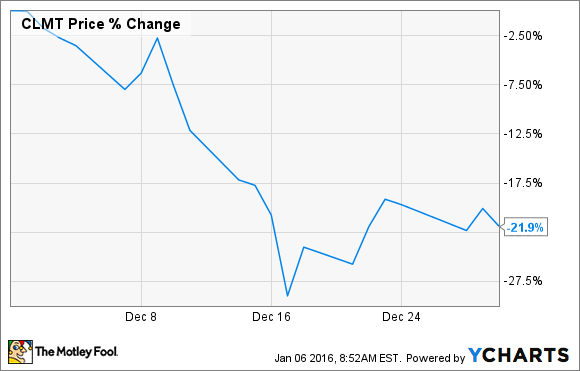 So what: Calumet Specialty Products is different from most oil refiners because its focus is less on refining crude oil into fuels like gasoline and diesel and more on, you guessed it, specialty petroleum products such as lubes and paraffin waxes. One of the reasons that a few refiners saw declines is that exporting crude oil directly may hamper their business of exporting gasoline and diesel. This doesn't apply to Calumet, but one way that crude oil exports can impact Calumet is that it won't get a discount on domestic crudes as much as it had enjoyed previously.

This isn't the only reason that Calumet's business slumped in December. Unlike many refiners, Calumet also runs an oil services business segment. As oil and gas drilling activity continues to weaken in the U.S., the need for drilling and services contractors has been drying up fast. This past quarter, the company even admitted to seeing rather weak performance in this segment. These two factors combined with just an overall weakness in oil and refined product prices led to this sharp downturn that ultimately led to Calumet posting a 25% loss for all of 2015.

Now what: Calumet Specialty Products Partners has been in a bit of a holding pattern while under the leadership of interim CEO Bill Hatch. The board of directors has selected a new CEO, Timothy Go, and he is expected to take the reins very soon. Until that happens and we see a definitive plan as to where Go would like to take the company, it's probably best to sit on the sidelines and not let this drop convince you to pick up shares before knowing exactly what you are getting into.