Please ensure Javascript is enabled for purposes of website accessibility
Log In Help Join The Motley Fool
Free Article Join Over 1 Million Premium Members And Get More In-Depth Stock Guidance and Research
By Daniel B. Kline - Jan 6, 2016 at 8:20AM

Sales matter, but not getting people sick can also be a big factor.

Whether you call it fast food or fast casual, the quick-serve restaurant business can be a brutal one.

That's something one-time industry golden boy McDonald's (MCD 0.50%) has been well aware of in recent years. The company battled quality and heath concerns as well as hipper competitors with better consumer reputations including Chipotle (CMG 1.17%) and Noodles & Company (NDLS 5.39%). Those issues and the increased competition slowly eroded the company's United States sales, and sent its stock into a two-plus-year slow decline.

But, McDonald's has slowly pieced together a comeback led by all-day breakfast and perhaps a bit of a backlash against its slightly upscale competitors. That led the company to a 2015 stock increase while both Chipotle and Noodles & Co. had a decidedly off year.

The reasons for why each stock performed as it did varied -- it wasn't based on a clear industry trend -- and all three companies face major challenges in 2016. 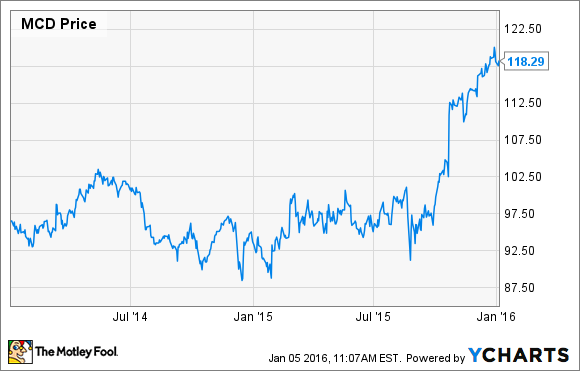 McDonald's stock steadily declined for much of the last three years before its mid-2015 comeback. Source: YCharts.com

Investors are finally loving it
McDonald' stock opened the year at $94.13 and closed at $118.14, a 25% increase according to S&P Capital IQ data. The price had inched up earlier in the year hovering around the high $90s, but the big jump happened on Oct. 22 when the company reported its third quarter results.

The big news in that report was that for the first time in two years comparable sales for U.S. stores increased. The gain was small, only 0.9%, but the number was a sign that the company's turnaround efforts were finally taking hold. McDonald's credited all-day breakfast, its new Premium Buttermilk Crispy Chicken Deluxe sandwich, and a return to the classic recipe ingredients for the Egg McMuffin, with helping produce the increase.

CEO Steve Easterbrook noted in the release that he was happy with the company's progress and encouraged by what it meant for the future.

"Third quarter marked an important step in the company's global turnaround," he said. "As we begin fourth quarter, comparable sales are expected to be positive in all segments. While still in the early stages, we believe our turnaround plan is starting to generate the change needed to reposition McDonald's as a modern, progressive burger company."

Noodles & Co. needs more sales
If McDonald's stock gained because it reported positive U.S. sales numbers, Noodles & Company may have dropped because of its negative sales growth. The company's stock price opened the year at $26.58 dropping 63% to close 2015 at a disastrous $9.69, according to S&P Capital IQ data.

Through the first three quarters of 2015 the chain saw total revenue grow by $43.1 million, or 14.6%, to $338.3 million, compared with $295.2 million in the same period of 2014. Unfortunately, the growth was mostly not due to same-store sales increasing. The company called it "the result of new restaurants opened systemwide since the beginning of the third quarter of 2014, the acquisition of 20 franchise restaurants in the last fifteen months" in a press release.

For the first nine months of the year comparable restaurant sales were flat for company-owned restaurants, declined 0.4% for franchise restaurants, and were flat systemwide. Restaurant contribution margin also decreased to 16.7% in the first three quarters of 2015, compared with 18.8% in the same period last year. The decrease was "primarily due to deleverage on lower average unit volumes due to a higher mix of immature restaurants and increased labor pressures," according to the company.

Chipotle has a food-safety problem
While Noodles & Co. and McDonald's saw their respective stock prices fall and climb due to sales changes, Chipotle's woes can be linked directly to an E. coli outbreak that affected operations at a number of its restaurants as well as what turned out to be a Norovirus incident in one of its Boston stores.

After opening at $686 Chipotle stock closed the year having dropped just over 30% to $479.85, according to S&P Capital IQ data. The big fall happened in mid-to-late November when the E. coli cases started popping up and it became clear it was not a singular or even a controlled incident.

As of Dec. 18, 53 people infected with the outbreak strain of E. coli had been reported from nine states, according to the Centers for Disease Control. "The epidemiologic evidence available at this time suggests that a common meal item or ingredient served at Chipotle Mexican Grill restaurants in several states is a likely source of this outbreak," the CDC wrote in a press release. "The investigation has not identified what specific food is linked to illness."

Different paths ahead
For McDonald's and Noodles & Company the future of their stock prices will almost certainly hinge on whether they can deliver sales growth. The Golden Arches looks tentatively to be on a better path, though its recovery remains tenuous. The noodle chain has a bleaker picture as it has a turnaround plan in place, but there is no way to know if it will work.

For Chipotle the path to recovery is clear. If the company can go for a period, maybe as long as a few months, without getting anyone sick, the public should be forgiving. People have not shown that they like the company's high-end quick-serve food any less, they are just concerned over E. coli. Prove that's not a problem -- something the company is making strong efforts to do -- and customers as well as the stock price should come back.

Daniel Kline has no position in any stocks mentioned. He eats at Chipotle nearly every week but almost never at McDonald's or Noodles & Company. The Motley Fool has no position in any of the stocks mentioned. Try any of our Foolish newsletter services free for 30 days. We Fools may not all hold the same opinions, but we all believe that considering a diverse range of insights makes us better investors. The Motley Fool has a disclosure policy.