Healthcare has proved to be an important sector to have exposure to over the past few years, because of the explosion of new medicines hitting the market and the positive impact of Obamacare on the earnings of some insurance companies and information technology companies alike. The Health Care Select Sector SPDR (NYSEMKT: XLV), for instance, has crushed the broader markets since 2010: 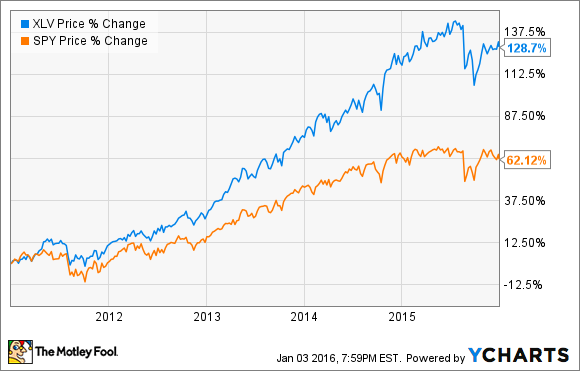 In 2015, the healthcare industry at large hit some bumps caused by the debate over soaring drug prices in the U.S., as well as the news that some top insurance providers such as UnitedHealth Group (NYSE:UNH) were experiencing higher-than-expected costs from the government-run public healthcare exchanges that may force them to stop offering these products starting in 2017.

These issues don't appear to be going away anytime soon, meaning that this year may be more difficult than usual for finding market-beating returns in the volatile healthcare sector.

Pharma still holds value in 2016
A brief scan over the varied healthcare landscape shows that pharmaceutical companies sport some of the lowest forward P/E ratios in the entire sector. The reason for this trend is fairly straightforward.

Pharma companies in general have been led by some overwhelming market forces to pursue an aggressive growth-by-acquisition strategy at a time of sky-high premiums. The net result is that the health of their balance sheets has been sacrificed in the process, with the industrywide average debt-to-equity ratio sitting at an astonishing 67.3.

So this unwelcome mixture of rising debt levels at a time of potentially shrinking operating margins -- driven by the drug-pricing debate -- has the market spooked, so to speak, leading to these compressed forward P/E ratios.

While the market's fear may turn out to be warranted, there are still some compelling buys in pharma that shouldn't be ignored. In fact, I think Teva Pharmaceutical Industries Ltd. (NYSE:TEVA) should produce market-beating returns in 2016, making it a great pick-up for the new year.

Teva is a top healthcare pick for 2016 because of its transformative deal with Allergan
Not long ago, the Street was trashing Teva's stock because of the growing concern that the sales of its flagship multiple sclerosis drug, Copaxone, would crater following the entry of a generic competitor from Novartis' subsidiary, Sandoz. For those new to this story, this fear was certainly warranted at the time, given that Copaxone has historically accounted for over half of the company's revenues.

In a surprising turn of events, however, Teva recently reported that its strategy of switching patients to a higher-dose formulation of the drug, and simple brand loyalty, significantly slowed the impact of the generic threat. This positive development apparently generated renewed interest in the generic-drugmaker from major investing firms such as Paulson & Co., helping its stock to push higher heading into the end of 2015: 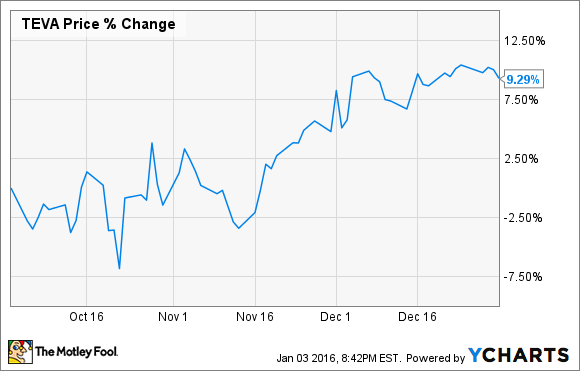 Although this rally is partly due to Copaxone's longer-than-expected shelf life, the catalyst that's going to carry this company into the future is the upcoming acquisition of Allergan's (NYSE:AGN) generic-drug unit.

This $40.5 billion deal brings Teva over 1,000 new products and is expected to help drive up sales by a noteworthy 30% in 2016. The key issue to understand is that Allergan is only willing to jettison this highly profitable and growing generic business because the drugmaker needs to start reducing its huge debt levels -- that stood at over $42 billion in the third-quarter of 2015 -- as a result of the company's aggressive M&A activity over the last few years. In short, Teva is buying a strong group of products, not Allergan's cast offs.

From a simple valuation standpoint, this tremendous rise in revenue has the company trading at a forward P/E of less than 12 at current levels, well below the industry average of 20. So, with a 2% dividend yield to boot, Teva is certainly one healthcare stock worth taking a deeper look at this year.

Having said that, Teva isn't exactly risk free. First off, there's no telling how long the company's present strategy for defending Copaxone against generic competitors is going to last, making it imperative that Teva successfully diversifies its revenue base through this deal with Allergan.

By completing this acquisition, however, the health of Teva's balance sheet will probably take a major hit. At last count, Teva sported a disconcerting debt-to-equity ratio of 50.9%. As this massive purchase of Allergan's generic drug business is being financed via a mixture of new debt and equity offerings, Teva may therefore have trouble maintaining its investment-grade rating. After all, Moody's investors service has already stated that the senior unsecured ratings of Teva are likely to fall into the lower rungs of investment-grade credit to Baa2, as a result of the new debt the company is taking on to buy Allergan's generic drug unit.

Foolish takeaways
Investors looking for top picks in healthcare might be wise to take a cautious approach with insurance giants such as UnitedHealth Group because of the headwinds emanating from Obamacare, and instead consider drugmakers such as Teva that are presently trading at relatively lower valuations. Teva, for instance, is projected to generate top-notch levels of revenue growth this year because of its transformative deal with Allergan, giving it one of the lowest forward P/E ratios among drug manufacturers as a result. All told, I think Teva is a relatively safe play in healthcare this year that should produce substantial gains for investors, even though the health of the drugmaker's balance sheet and the commercial longevity of its most important product are noteworthy risk factors that could create some short-term turbulence along the way.