The well-known clothing retailer skidded throughout the year due to a number of challenges in the apparel sector that led to declining sales.

What: Shares of The Gap (NYSE: GPS) were in free fall last year, losing 41% of their value, according to data from S&P Capital IQ. The challenges at Gap mirrored the struggles of clothing retailers as a whole. As the chart below shows, the losses were less a result of any singular event and more of a steady decline. 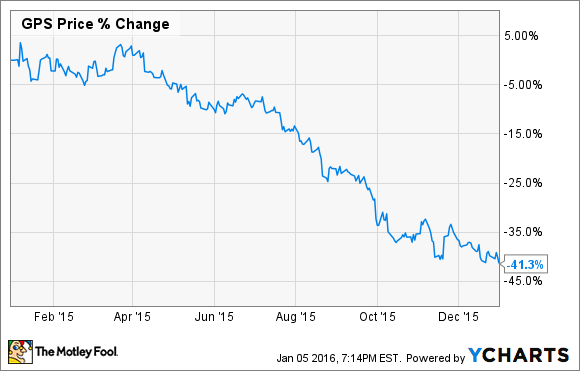 So what: Several factors have been pressuring clothing retailers like Gap. Fast fashion chains, including H&M, Zara, and Forever 21 have exploded in popularity, taking share from the company's Gap and Banana Republic brands, which have lost some of their cultural preeminence over the years. Changes in shopping habits have also affected the company as mall visits are declining, leaving staples like Gap in the dust as consumers shift their spending to online channels. Currency fluctuations add to the challenges, as analysts now expect full-year sales to decline by 3% over the year. Wall Street lowered its 2015 earnings per share estimate from $2.74 to $2.39 over the last three months.

Its third quarter earnings report best sums up its struggles. Comps were down at Gap stores by 4% and at Banana Republic by 12%. At Old Navy, the company's one winner in recent times, same-store sales gained 4%. Old Navy actually drives close to half of the company's revenue, but the weakness in the other brands has overshadowed any growth at bargain-priced Old Navy. At the time, CEO Art Peck described the quarter as challenging and attempted to put a positive spin on the upcoming holiday season, but there are reasons to be concerned about how that went as well.

Now what: With unseasonably warm weather having hit much of the country in December, retailers offered huge markdowns in hopes of moving winter inventory during the all-important holiday season. The effect of the weather will likely weigh on Gap's fourth quarter results, and analysts are expecting little improvement in 2016, forecasting just 1% growth in its top line. The Gap has vowed to revamp its brands in a move to catch up with its nimble new competitors, but until results turn around, there is little reason to believe in that strategy.