Learn about one midstream MLP that's bucking the recent collapse of its peers and why its high share price could help ensure better growth in the years to come.

The oil crash has understandably taken a heavy toll on oil and gas companies. Many midstream operators, whose long-term, mostly fixed-fee, tollbooth-like business model often insulate their distributable cash flows (DCF) from volatile energy prices -- and made them the darlings of dividend investors in recent years -- have been crushed as well. 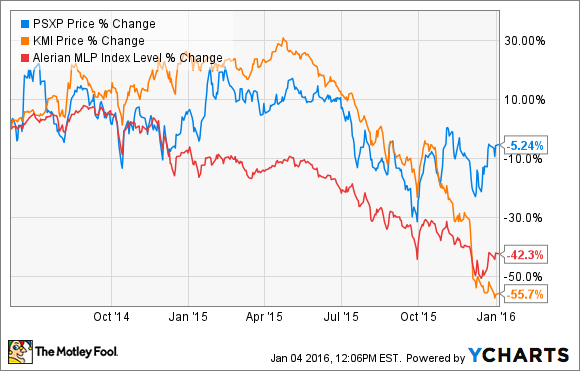 Yet Phillips 66 Partners (PSXP) has managed to massively outperform its peers over the past 18 months, while Kinder Morgan (KMI 0.55%), often considered one of the bluest of the midstream blue chips, has been decimated far worse than most of its competitors.

Long-term value investors know that the best time to buy quality stocks is when Wall Street is running scared, and so you might think that it's best to hold off on buying Phillips 66 Partners, since it's obviously not as undervalued as many of its competitors.

But given current energy market conditions, Phillips 66 Partners' high valuation may actually be a great reason for long-term income growth investors to climb on board what is likely to be one of the best midstream MLP growth stories of the next decade.

Understanding the midstream MLP business model
Because midstream MLPs have such steady cash flows, they are able to pay out the majority of DCF to unit holders as quarterly distributions, resulting in historically high-yields.

The reason Kinder Morgan recently had to slash its dividend by 75% was that it lost access to pretty much all its funding sources. Its debt load is so high that it can't borrow additional growth capital without risking its investment-grade credit rating.

Meanwhile, Kinder shares have fallen so much as to make the cost of selling additional equity too high to make it worth it for the company long term. Finally, Kinder was paying out almost all of its cash flow as dividends, meaning it wasn't able to retain enough DCF to fund a significant proportion of its $21.3 billion project backlog.

With no oil recovery in sight, Kinder made the painful but wise long-term decision to slash its dividend and fund its backlog with internally generated cash, likely freeing it from the need to access debt or equity markets for the foreseeable future.

In stark contrast, because of a much stronger balance sheet and access to all three sources of growth capital funding, Phillips 66 Partners is able to both reward investors with not just one of the most sustainable and secure payouts in the industry, but also sensational distribution growth that is likely to continue for years to come.

Phillips 66 Partners' current yield, though meager by the standards of the midstream MLP industry, is still generous compared with the S&P 500's 2.1% payout.

Better yet, in the last quarter, the MLP was able to generate 40% more cash than it paid out to investors, courtesy of growing its distribution an impressive 35%, but its DCF per unit grew an even more stunning 53%.

If Phillips 66 Partners is able to continue to grow its DCF per unit faster than its payout then its distribution coverage ratio -- the best long-term indicator of payout security -- will continue to increase, and better yet, so will the MLP's stream of excess DCF, which can be used to fund further growth.

Which brings me to the main source of Phillips 66 Partners' future greatness -- Phillips 66's mountain of midstream assets, most of which are likely to eventually be dropped down to fuel its MLP's growth. 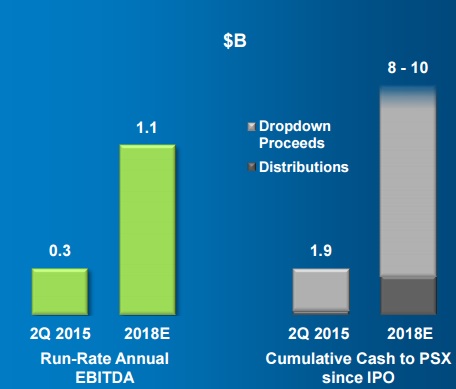 To fund all this growth potential, Phillips 66 is able to obtain equity growth capital, because of its high valuation, at attractive levels. This gives it an average weighted cost of capital of 13.03%, far lower than its return on invested capital of 19.3% which indicates it's able to make highly profitable acquisitions from its sponsor's drop downs to fuel future growth.

Bottom line
Phillips 66 Partners' high valuation relative to its peers is not, in fact, a reason to hold off on buying units at today's prices. Given its enormous growth potential, courtesy of having one of the world's largest refiners as its sponsor, and access to multiple sources of growth capital, I'm very confident that this midstream MLP will prove to be one of the best long-term income investments of the next decade or two.

Adam Galas has no position in any stocks mentioned. The Motley Fool owns shares of and recommends Kinder Morgan. Try any of our Foolish newsletter services free for 30 days. We Fools may not all hold the same opinions, but we all believe that considering a diverse range of insights makes us better investors. The Motley Fool has a disclosure policy.