What: The troubles for Sears Holdings (NASDAQ:SHLDQ) grew in 2015 as the once venerable retailer fell 38% according to data from S&P Capital IQ. As the chart below shows, the steep drop came in a short period of time. 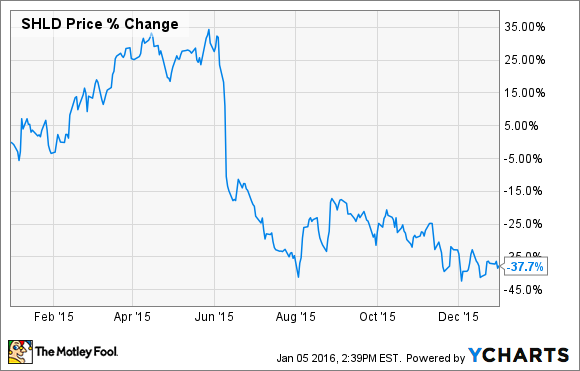 So what: Sears Holdings, the parent of Sears, Kmart, and other household brands climbed steadily throughout the first few months of the year on excitement about the expected creation of a REIT. For years the stock has been a volatile one -- investors have viewed the company as an asset play due to its consistent spinoffs, owning shares in spite of the wretched performance of its retail brands.

Much of Sears' downfall this year came from the creation of Seritage Growth Properties (NYSE:SRG), a Real Estate Investment Trust that owns some Sears stores and leases them back to the retailer. The stock began to tumble in June as the company prepared a rights offering for the new stock, and when investors received their transferable rights to purchase shares of Seritage, stock in Sears Holdings fell by an amount that corresponded to the value of those now separately-traded rights. Investors also seemed to worry that the parent company was being left as a shell of its former self. The sale of the properties brought Sears Holdings some much needed cash to pay off debts and absorb its operating loss, but the underlying health of the company was made worse by the lease payments it now has to make. A report of an 11% same-store sales drop in its first quarter also prompted a simultaneous sell-off as the stock dropped nearly a third in a single June week. Shares continued to fall in the week that Seritage went public, remaining mired between $20 and $25 for the duration of the year as another woeful earnings report clobbered the stock in December.

Now what: The Seritage REIT buys Sears 18 to 24 months of liquidity, and it still has a solid portfolio of properties it could spin off as well as brand name assets like Kenmore appliances and Craftsman tools. However, the picture of the retail core continues to worsen. Analysts are expecting revenue to decline 9% this year after a 19% tumble last year, and its per-share loss is projected to expand again. With its core retail assets setting more money aflame each quarter, it's hard to see how Sears stock doesn't fall again in 2016.