Please ensure Javascript is enabled for purposes of website accessibility
Log In Help Join The Motley Fool
Free Article Join Over 1 Million Premium Members And Get More In-Depth Stock Guidance and Research
By Jason Hall - Jan 6, 2016 at 8:00AM

With oil prices putting a tight squeeze on the economic benefit of natural gas for transportation, can Clean Energy Fuels make 2016 a great year?

Clean Energy Fuels Corp.'s (CLNE 3.13%) stock chart makes it look like a company with little going for it: 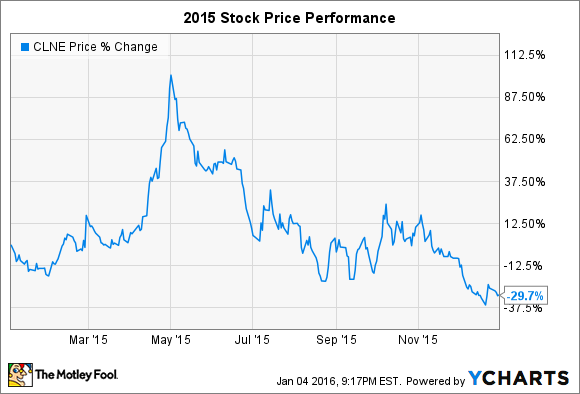 However, things may not be as bad at the natural gas for transportation company as it may appear. Yes, there are some real concerns that can't be ignored, but the company actually had a pretty solid 2015, and showed steady improvement in several areas of its business, including reducing operating costs, continuing to grow fuel sales, and also maintaining its per-gallon fuel margins, even in the face of a major drop in fuel prices over the past year and a half.

Once a refueling station has been built, it will be in operation for decades before it needs any major new capital investment. And since demand for new stations will largely be based on demand from new fleet operators, there is no guarantee that there will be a steady ramp of deals for new stations each quarter. This can make for "lumpy" quarterly results and even a revenue decline from one period to the next. However, that doesn't mean that Clean Energy's business is unhealthy, because it ignores the steady, recurring cash flows generated by the core refueling and station operating business.

A station is bought and paid for one time, but the vehicles that use it need fuel every day. Furthermore, the majority of these vehicles, like trash trucks, transit buses, and heavy-duty trucks, remain in operation for years and years. So while equipment manufacturers may suffer when buyers put off replacing old equipment, Clean Energy gets a steady benefit from that vehicle as long as it's in operation.

Cheap oil's impact is uncertain
Part of the value proposition behind Clean Energy's business is the low cost of natural gas as a transportation fuel. Here's what has happened to fuel prices over the past year and a half: 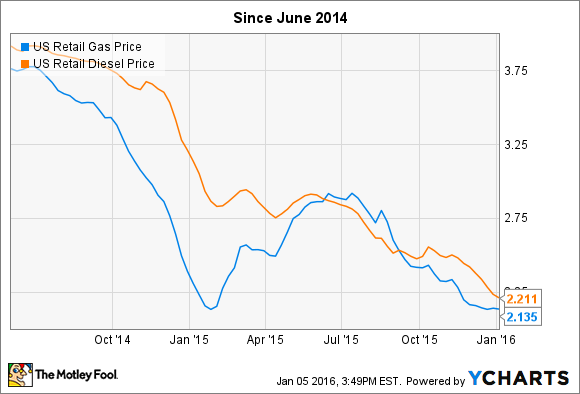 In other words, fleet operating costs are down simply because fuel is cheaper, and this reduces the incentive for fleet managers to take a risk with a new fuel. That's a big deal for industries like trucking, with razor-thin margins and vehicles that cost upwards of $150,000.

Here's the rub: According to the U.S. Energy Information Administration, the average price for natural gas last year was $2.61 per MMBtu, about $0.33 per gallon-equivalent before factoring in about $1 per gallon in transportation, processing, and storage costs to make it vehicle-ready. Natural gas may be less compelling than it was a couple years ago, but the cost advantage remains appealing for many. Evidence of this can be seen in the trash truck segment, where more than two-thirds of new trucks are ordered with natural gas engines.

However, adoption in the trucking industry and in smaller vehicle segments such as pickups and automobiles simply hasn't happened quickly. Many smaller vehicles don't consume enough fuel to justify the additional vehicle cost, while truckers -- especially smaller operators -- have been slow to take on the risk and uncertainty of buying a truck with limited access to fuel.

While Clean Energy may not maintain the double-digit fuel sales growth rate of the past couple of years, it's hard to predict zero growth going forward.

Worst-case scenario
Clean Energy has $150 million in secured notes coming due mid-year, and has announced that it will use about half cash and half stock sales to pay it off. Considering that the company is still cash flow negative, this could put it in a precarious position come year-end.

Clean Energy ended last quarter with $166 million in cash and short-term investments, down $16 million. The company will spend $75 million to pay down debt, and will collect $25 million or more in alternative fuel tax credits this year. Taking a worst-case scenario approach which assumes zero growth and no cost reductions or capex cuts in 2016, and that would leave the company with about $40 million in cash at year-end. That's two quarter's worth of cash at the current burn rate.

Looking ahead: The worst-case seems unlikely
It's hard to imagine zero improvements in operating efficiency and cost reduction. For example, Clean Energy recently implemented changes in its compression business that are lowering costs and improving margins, and those changes have only just taken effect; that's above and beyond the $9 million in reduced SG&A expenses through the first nine months of last year. The planned debt reduction for 2016 will also net $10.8 million in full-year savings -- that alone should reduce expenses by $4 million in 2016.

It's also hard to imagine fuel volume not growing as well. After all, natural gas remains cleaner and cheaper than oil-based fuels. If the company grows fuel volume by 5% in 2016 -- well down from recent years -- that would net $5 million in incremental operating profits.

Add it all up, and even a relatively conservative estimate could see Clean Energy lower expenses by another $10 million-$15 million in 2016, while improving operating profits by $5 million or more, giving it strong momentum heading into 2017.