Regeneron Pharmaceuticals' (NASDAQ:REGN) stock is riding high after another year of market-thumping returns. Shares of the biotech behemoth soared more than 32% during 2015, an especially impressive performance when compared with the S&P 500's negative return. 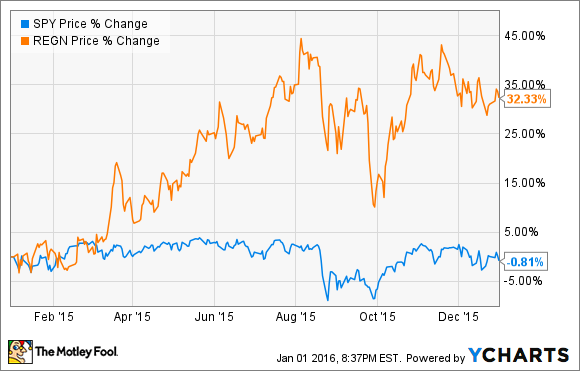 But will the company be able to continue its winning ways in 2016? Here are a few reasons I think it can.

Eylea provides revenue visibility
Regeneron's best-selling eye disease drug, Eylea, is on a roll and shows no signs of slowing down. Eylea scored a handful of important new approvals in 2015 that should help it continue to win market share from other drugs in the space, such as Novartis' (NYSE:NVS) Lucentis.

Regeneron's and Novartis' drugs compete head to head as treatments for wet age-related macular degeneration and diabetic macular edema, but that hasn't stopped Elyea from showing impressive growth. Sales of Elyea were up 53% in the third quarter alone, and with a few new indications under its belt, its growth is almost certain to continue. By contrast, Novartis is showing declines in Lucentis sales.

Did a new blockbuster just launch?
Regeneron and its collaboration partner, Sanofi, received the regulatory thumbs-up from both the FDA and European Union in 2015 to being selling Praluent, a new drug used to lower cholesterol levels.

Praluent could be a huge winner for both companies. It represents a new type of cholesterol-busting medicine known as PCSK9 inhibitors. This new class holds the potential to help millions of patients to take control of their cholesterol levels. In clinical trials, patients who used Praluent in addition to statins were able to lower their LDL cholesterol by a mean of 58% from pre-treatment levels, with minimal side effects.

Sanofi and Regeneron estimate that as many as 8 million to 10 million Americans alone currently fit its labeling. With the wholesale price of the drug currently set at $14,600 per year, it wouldn't take much for this drug to produce billions in revenue, and quickly.

But wait -- there's more!
The opportunity in front of Eylea and Praluent alone should be more than enough to make 2016 a great year for Regeneron, but the company also has an exciting pipeline that could really make the year great.

Regeneron has two drugs in late-stage clinical trials that also hold the potential to become blockbusters one day. First up is sarilumab, which is being studied as a potential treatment for arthritis. The company had planned on getting it into regulators' hands during 2015, but that didn't happen, so it's likely we'll see a submission early this year. Second is dupilumab, a potential treatment for eczema and asthma, which might also be able to find its way to the regulators by the end of 2016.

2016 is primed to be another great year
With Eylea poised for continued growth, Praluent hitting the markets, and two more potential blockbuster drugs waiting in the wings, Regeneron is poised to put up some serious growth in 2016 and beyond, which leads me to believe that shares could see plenty of upside this year.