The sky is falling. Two-thirds of the earth is water. Therefore shipping stocks are getting hit the hardest? It's all I got, Fools.

What: Shares of offshore energy shipping giant Teekay Corporation (TK 0.90%) and its MLP Teekay Offshore Partners L.P. (TOO) are both down more than 10% on January 7, while shares of Teekay Tankers Ltd. (TNK 6.76%) and Teekay LNG Partners L.P. (TGP) are down about 6%.

Since the beginning of December, that puts shares of the Teekay empire companies down a lot: 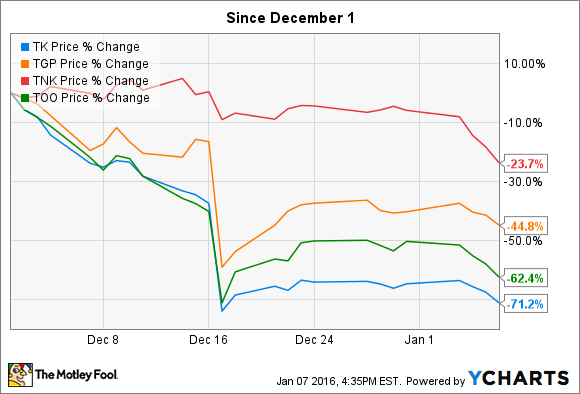 So what: Today, the market is terribly afraid, and that fear started while most Americans slept. China's stock market opened for trading early this morning, and promptly lost 7% of its value before trading was halted and the market was closed... 29 minutes into the session.

Needless to say, every other major global stock market that opened after this fell sharply, and the U.S. exchanges have been no exception. All the major U.S. indices finished trading down more than 2%.

What does this have to do with Teekay Tankers, Teekay LNG Partners, Teekay Corporation, and Teekay Offshore Partners? Today's stock market sell-off doesn't really have anything directly to do with them, but what's happening on the global stage is quite relevant, at least in the long-term.

The Chinese stock market is falling because of greater fears about China's economy. Economic growth has slowed sharply over the past half-decade, and many are concerned that growth will slow even more in 2016.

Now what: Tying it all back to the Teekay companies is this: China (and much of Asia) is a massive market for energy, and the oil, natural gas, and the products made from these commodities that Teekay ships, must have end-market demand. If consumption of these products falls, that's bad for Teekay, and that seems to be the driving fear right now. In explanation, Chinese demand for energy is set to weaken, and companies like Teekay that help transport it will suffer.

But these companies aren't standing still, just waiting for the inevitable. Three weeks ago, it was announced that Teekay, Teekay LNG Partners, and Teekay Offshore Partners would all cut their dividends going forward, and the benefit of this retained cash flow would help support growth initiatives under way at Teekay LNG and Teekay Offshore.

Management has been adamant that all of the Teekay entities are in better shape than the market seems to think, and that the cash flows produced by operations at them will be more than sufficient to support operations and capital plans for the foreseeable future.

I think that's probably the case, and the worst has probably already happened for Teekay and its partnerships, but there still remains a measure of uncertainty. Now could be a great time to invest, but there's a solid chance these stocks don't really go anywhere over the next year or so. If you're willing to ride out that uncertainty, the long-term looks fine for Teekay, and is probably less at-risk than the market seems to think.