All three biotechs are down for the exact same reason: They sold additional shares through secondary offerings.

So what: Companies usually have to offer a discount to get buyers for their secondary offerings because the firms that buy them know the stock will fall after the secondary offering -- more shares outstanding means that each of the old shares is worth less. But these firms had to offer pretty steep discounts.

Some of the discount has to do with the current market. Buyers are asking for more of a discount because they're worried that the shares will fall further before they have a chance to sell their shares. The iShares NASDAQ Biotechnology Index ETF (NASDAQ:IBB) is down nearly 9% in the first four trading days of the year. 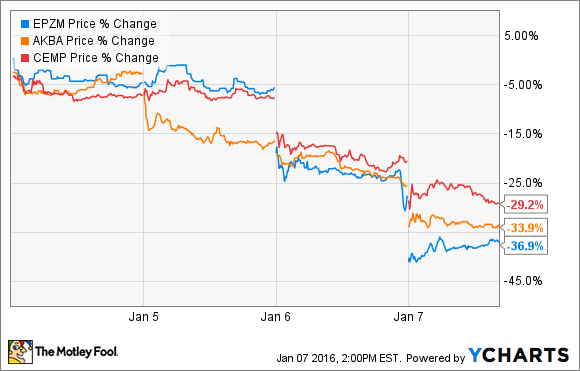 A good company raising capital in a solid market can usually do it overnight. The company announces their intentions after the market closes and has all the buyers at a set price before the market opens the next morning.

Now what: In the short term, where these biotechs go from here is anyone's guess. They may trade at the whim of general market sentiment or they could bounce back. TherapeuticsMD (NASDAQ:TXMD) priced at an 11.4% discount on Wednesday and then came roaring back on Thursday. At one point, TherapeuticsMD was up 14% Thursday, actually exceeding the price it was at before announcing its intention to raise capital. Unfortunately, TherapeuticsMD has since given back much of those gains, although it's trading above the offer price.

In the longer term, the companies will trade based on upcoming data releases and drug approvals.

Epizyme expects to present interim data from a phase 2 clinical trial for tazemetostat in B-cell non-Hodgkin lymphoma at a medical conference by mid-2016. While the trial is only a phase 2, if the data are strong enough, the trial could be enough to get the drug approved because Epizyme is testing the drug on patients that don't have any other options.

Akebia Therapeutics recently started a phase 3 study testing vadadustat in non-dialysis patients with anemia related to CKD and plans to start a second phase 3 trial in dialysis patients later this year. The trials will take a few years to enroll and complete, so the next big value driver could come from a partnership for the drug.

Cempra is the furthest along of the three, having already proved its antibiotic Solitaire-IV is effective in a phase 3 trial. The company is working on getting the data to the FDA and European regulators and expects the applications will be complete in the first half of the year. Given the unmet need the drug will get a priority review and could be on the market in the U.S. by the end of the year.

If you had confidence before the raises that these binary events are going to go the companies' way, there's no reason to sell just because the company raised capital.