Myopic concerns regarding quarterly iPhone sales continues to create an opportunity for long-term investors to pick up shares of Apple.

Red China is taking on a new meaning as another 7% decline in the stock market forces the second trading halt in a week, dragging worldwide equity markets down with it. U.S. stocks are no exception, with the Dow Jones Industrial Average (^DJI 0.65%) and the S&P 500 (^GSPC 0.64%) down 1.17% and 1.21%, respectively, at 12:20 p.m. EST. After yesterday's 2% decline, shares of Apple Inc are performing roughly in line with the company's large-cap peers, down 1.83%.

According to yesterday's report on the Nikkei Asian Review, several of Apple's suppliers expect a 30% shortfall in the production of iPhones relative to initial plans for the current quarter -- and that has rattled investors in the world's most valuable company.

However, there is reason to believe patient, value-driven investors will earn solid returns from current levels while bearing modest risk. Said differently, the current price contains a margin of safety, to use Ben Graham's expression.

Analysts' and investors' intense scrutiny on the iPhone is understandable: Contributing two-thirds of Apple's revenue in fiscal 2015, it is the company's flagship product, a blockbuster that is unparalleled in the annals of consumer electronics.

Nevertheless, I believe a byproduct of this intense focus is myopia, as analysts obsess over the latest data point, report, or rumor relating to the iPhone.

Apple's long-term success is not a function of quarterly volatility in iPhone sales. Trying to estimate those figures and constantly tweaking long-term forecasts on the basis of quarterly results is not productive. In fact, for a long-term investor, it would be highly counterproductive.

Given Apple's competitive position, its long-term growth path is likely to be steadier than quarterly results. The two essential questions a long-term investor must answer in reassessing Apple (or assessing, if she does not already own shares):

On both of these counts, Apple's stock looks like a favorable proposition right now (and perhaps even very favorable). When a margin of safety exists on a company of Apple's quality, investors who are not already overweight the stock ought to pounce on it. That is situation before us now.

Shares of Apple dipped below $100 for the first time since August during yesterday's session, and as things stand, they are on track to close below that level today. Apple has not closed below triple digits since Oct. 2014.

Below is Apple's 10-year stock chart: 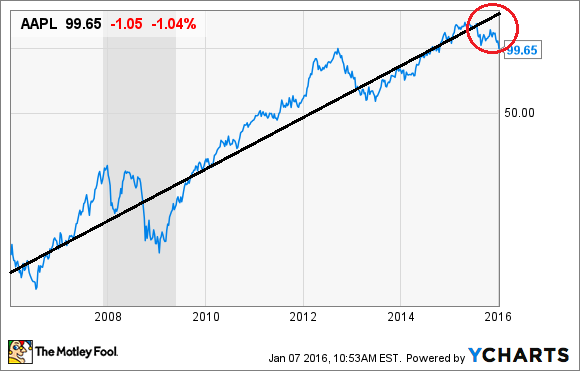 Note that the price axis is on a logarithmic scale, such that a straight line represents prices that are compounding at a constant rate.

The trend line I have drawn (a "best-fit" line that has not been generated mathematically -- I eyeballed it, using a couple of assumptions) suggests that the shares have been undervalued roughly since the second half of 2015 (the portion of the graph circled in red).

Now, one shouldn't expect Apple's share price to compound at 25% annually over the next decade, which is roughly what it achieved over the past decade, but this graph suggests it is reasonable to expect it to compound at or above the growth rate in earnings per share, the prospects for which are still very decent (and don't forget the dividend return!).

Alex Dumortier, CFA, has no position in any stocks mentioned. The Motley Fool owns shares of and recommends Apple. Try any of our Foolish newsletter services free for 30 days. We Fools may not all hold the same opinions, but we all believe that considering a diverse range of insights makes us better investors. The Motley Fool has a disclosure policy.