The digital video veteran has been laying the groundwork for a full-on global explosion for months.

Netflix (NFLX 5.03%) shocked us all on Wednesday. We already knew that the digital video maven was planning to cover the globe in streaming services by the end of 2016. But nobody expected them to get the job done in the first week of January -- even though the signs had been piling up for some time.

But that's what Netflix CEO Reed Hastings did at the end of his CES keynote speech. Having spent half an hour on distractions like the history of TV technology and the upcoming slate of Netflix original shows, the last five minutes of his presentation finally cut to the chase:

Today, I am delighted to announce that while we have been here on stage at CES, we switched Netflix on in Azerbaijan, in Vietnam, in India, in Nigeria, in Poland, in Russia, in Saudi Arabia, in Singapore, in South Korea, in Turkey, in Indonesia and in 130 new countries.

While you have been listening to me talk, the Netflix service has gone live in nearly every country of the world but China -- where we hope to also be in the future (audience laughs).

Today, right now, you are witnessing the birth of a global TV network.

Thunderous applause ensued. Shocked by the magnitude of the expansion, investors quickly caught on. Netflix shares immediately jumped 4% higher and ended the day nearly 12% above that morning's opening price.

But I said that evidence for this kind of move had been piling up, right? Let me explain how we could have seen Hastings' instant 130-country expansion coming.

This was pretty much a requirement for going global. This week's rapid deployment could never have happened without a decent catalog of content with worldwide rights.

Hastings has plenty to smile about right now. Photo: CES.

So recent Netflix originals such as Jessica Jones, Grace & Frankie, and Narcos are all available worldwide. That's not always the case for older material. House of Cards, for example, found a local distribution deal in Australia before Netflix opened shop Down Under, and is absent from the Netflix catalog there. That political drama is also missing from this week's launch in Israel and India for the same reason -- local TV networks own the distribution rights for now.

But Sony (SONY 2.26%) produced Bloodline under a global Netflix license. The wide-ranging partnership between Netflix and DreamWorks Animation (DWA) covers the whole world except for China. The producers get instant access to a global stage, while Netflix gets quality content that can attract subscribers anywhere.

This is the new normal for Netflix content deals, unless the movie or series is of such extremely local interest that Sarandos and Hastings see no need to take it worldwide. This core catalog, not limited by national borders, will continue to grow. But it's already large enough to start at least a skeleton service anywhere on Earth.

The easy bit
The other key comes from the technology behind Netflix's streaming services.

Netflix can start a streaming service in Sri Lanka or Angola without ever setting foot in those countries. The Internet is a truly global network, and it's easy to serve up digital content from a handful of centralized servers to a wide range of target markets.

Later, when subscriber counts and bandwidth usage start to climb, Netflix can go ahead and supplement the fastest-growing zones with more media server support. Launched more than three years ago, the Open Connect content delivery network will eventually expand into strategically important and/or successful markets. That network takes a load off the local long-distance Internet connections while also providing higher-quality content to Netflix subscribers. In the long term, Open Connect boxes will probably serve every market that matters. Getting there will be a process of learning and investment.

But again, in these early days it's quite enough to have a handful of connection points around the world. Consider how Australian and Japanese movie buffs used to rely on technological trickery to access Netflix in America or Europe, before their own markets opened up. Hardly ideal, but often good enough.

So expanding into new markets is not a hard technical problem. It's more about putting together a strong content library for each new territory (see above) and then offering a home page for the service in a locally useful language.

The hair-trigger launch of 130 new territories -- while Hastings was delivering his half-hour speech, mind you -- is just more evidence of how smooth the expansion is from a technical point of view. Set up the local libraries and home pages, then flip a switch and it's live. 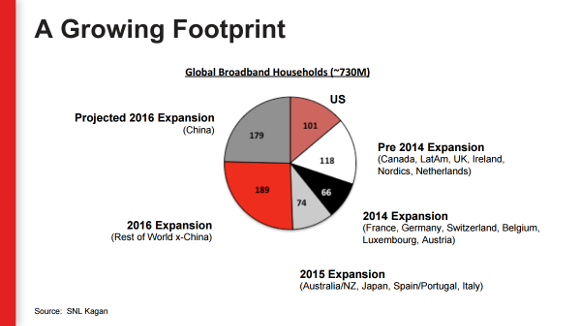 Putting it all together
So Netflix has been baking up global license deals (and making sure that its own productions don't get tied down in local deals anywhere) for a full year, and the technical side of this launch was always a gimme. Maybe we shouldn't have been surprised to see a full-scale launch in one fell swoop.

Now, Netflix did set us up to expect a more measured approach. For one, the international expansion had been happening in smaller batches. This 130-nation boost could just as easily have come in, say, four bundles of 30-something markets each. Also, the company always aimed to go global by the end of 2016. Excluding the missing Chinese crown jewel, this was a big case of "underpromise and overdeliver."

That's always better than the other way around, of course. And don't forget that these 130 new markets only add up to roughly one quarter of the global broadband market. With so many moving parts and minuscule pieces adding up to a greater whole, getting every detail exactly right from the get-go is not so important. Netflix might as well just get started and work out the kinks along the way.

Next up, Netflix is set to report fourth-quarter results on Jan. 19. Expect to get more detail on this massive launch, and to see analysts pressuring Hastings on how the upcoming Chinese premiere is working out. Also, we'll see fresh forecasts of the costs involved in running a truly global service, and maybe even a peek at exactly how the company intends to turn a serious profit in 2017.