What: Momenta Pharmaceuticals (NASDAQ:MNTA) was up as much as much as 11.7% today, eventually finishing up 6.8% after announcing a deal with Mylan (NASDAQ:MYL) to develop six biosimilar products.

So what: Momenta Pharmaceuticals had said it was looking for a new partner after Baxter (NYSE:BAX) dropped out of their 2011 deal. It was one of those it's-not-you-it's-me breakups -- Baxter reorganized, including a subsequent spinoff of its biotech business into Baxalta, which retained the biosimilar that Baxter had already committed to -- so it wasn't a big surprise that Momenta eventually found a home for the rest of its biosimilar program.

Mylan is paying $45 million upfront to gain access to Momenta's biosimilar version of Orencia, an anti-inflammatory drug made by Bristol-Myers Squibb, and five other undisclosed biosimilars. Momenta could also get up to another $200 million in milestone payments tied to the drugs meeting predefined milestones. 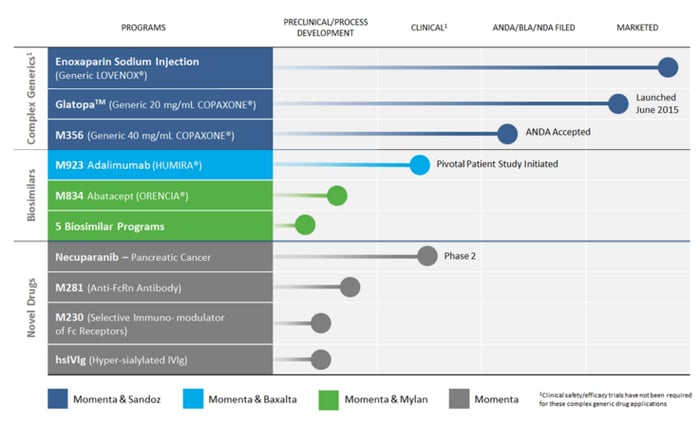 Both companies will share in the cost of developing the biosimilars and reap the rewards equally. That's the kind of deal structure Momenta had said it was looking for -- and one of the reasons it raised about $150 million in a secondary offering last May. Add in the $45 million, and Momenta has quite a bit of cash to pay for its half of the program and the rest of its pipeline.

Now what: Mylan should be a good partner given its vast experience marketing generic drugs. Biosimilars are going to be a new animal since they won't be readily substituted like small-molecule generics and will likely require some marketing. Mylan has some other biosimilars through a partnership with Biocon, an Indian biotechnology company, so hopefully many of the kinks will be worked out before Momenta's drugs hit the market.