A major scandal sunk the flooring dealer. Will 2016 offer redemption?

What: Shares of Lumber Liquidators Holdings (LL -0.27%) got taken to the woodshed last year, falling 74% according to S&P Capital IQ. The company suffered as a result of a tainted wood scandal, forcing shares down precipitously when the news broke in February. The stock continued to fall thereafter, as its financial performance crumbled. 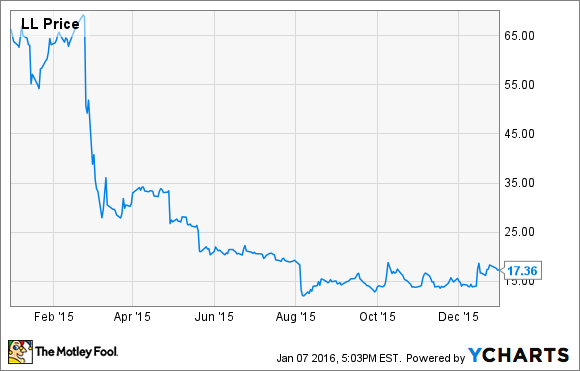 So what: Lumber Liquidators attracted some of the biggest stock market headlines of the year as the scandal was first broken by 60 Minutes. Shares began falling before the report even aired as word of its contents leaked out, dropping by 36% on Feb. 25 alone.

The Monday following the report's airing, the stock lost another 25% as as the report seemed to show that the company's China factory was deliberately mislabeling its laminate flooring in order to pass California regulations. The product allegedly contained illegal levels of formaldehyde, a carcinogen, according to 60 Minutes' report. Lumber Liquidator responded to the allegations, questioning 60 Minutes' testing, but the moves didn't halt the stock's free fall.

The stock continued to slide afterwards as investors and management reacted to fallout from the report. Politicians called for a federal investigation into the company, adding to the company's woes.

In its first-quarter report, Lumber Liquidators paid the price again, falling 20% on a surprise loss of $0.29 in the quarter. In March, after the news broke, same-store sales were down 17.8%. On May 21, CEO Robert Lynch resigned, sending the stock tumbling and confirming the investors' deepest worries. Shares plummeted again following its second-quarter report in August thanks to a massive loss of $0.75 a share. The stock stayed around the $15 range for the duration of the year. Investors got some good news when noted short seller Whitney Tilson announced he would close out his bet against the stock.

Now what: Lumber Liquidators was a market darling back in 2013, but the stock is a big question mark now. Comparable sales weakened from the second quarter to the third, though its loss narrowed, indicating that management seems to be bringing expenses under control.  Analysts are expecting a modest recovery in sales this year, but a narrow loss. Though a near-term recovery in the stock seems unlikely, over the long term the company should return to profitability, pushing the stock higher.

Jeremy Bowman has no position in any stocks mentioned. The Motley Fool recommends Lumber Liquidators. Try any of our Foolish newsletter services free for 30 days. We Fools may not all hold the same opinions, but we all believe that considering a diverse range of insights makes us better investors. The Motley Fool has a disclosure policy.