Please ensure Javascript is enabled for purposes of website accessibility
Log In Help Join The Motley Fool
Free Article Join Over 1 Million Premium Members And Get More In-Depth Stock Guidance and Research
By Daniel Miller - Jan 9, 2016 at 9:33AM

Each year brings plenty of blunders throughout the market. The U.S. auto industry had plenty of its own; here are three of its largest black eyes in 2015.

By now, you've surely heard that the U.S. auto industry set a new record for vehicle sales during 2015. A solid December, though perhaps fueled by incentives, helped push annual sales beyond the record set in 2000 to more than 17.47 million light-vehicle sales last year.

However, despite a strong selling year, there were still huge blunders, reminiscent of General Motors' massive recall debacle in 2014. Here's a look at three of the largest blunders in the automotive industry last year.

Airbag debacle
Without a doubt, the largest blunder in the automotive industry last year was Takata's faulty airbags. A product designed to protect drivers and passengers in the event of a collision turned deadly when Takata's inflators began exploding with far too much force, unleashing shrapnel into the vehicle.

The faulty Takata airbags turned into one of the most widespread safety recalls in the U.S. auto industry's history, as it covered 23 million airbag inflators in 19 million vehicles produced by 12 car companies, according to Reuters. The faulty airbags are thus far linked to nine deaths and more than 100 injuries -- all deaths have been in Honda Motor vehicles. Bloomberg reported that Honda raised issues and questions about the airbags with Takata in July 2009.

In November 2015, Takata agreed to pay a $70 million fine from the National Highway Traffic Safety Administration, and could face more penalties in the future. However, it will certainly pale in comparison to General Motors' recent fines and costs for its ignition-switch recall in 2014, which surpassed $4 billion.

Of all the blunders on this list, Takata's could have the most impact on its business. Already the company is reporting that sales of its other products, such as steering wheels, are being negatively affected, according to reports from Bloomberg. If Takata's brand image has taken a drastic hit, causing sales of its other products to decline, it could hinder the company's ability to handle the costs of replacing air bags in more than 40 million vehicles. Stay tuned: This will be a development to watch this year.

Diesel scandal
Though Volkswagen Group's (VWAGY -0.10%) diesel-emissions cheating scandal wasn't as deadly as Takata's faulty airbags, it's likely to cost the German automaker far more. It's been named the "diesel dupe" -- or "dieselgate," for NFL-savvy onlookers -- but essentially, Volkswagen cars were caught being sold in America with software that could detect when the vehicles were being tested for emissions, and would change the vehicle's performance to improve results in order to pass the test.

The months after the scandal broke were a bumpy ride for Volkswagen, and that's putting it nicely. Executives were tossed, consumers weren't satisfied with the goodwill cash offer from Volkswagen, and the brand's U.S. sales plunged 25% in November and 9% in December.

Though Volkswagen sells fewer namesake-brand vehicles in the U.S. compared to the major manufacturers, that didn't stop the U.S. Department of Justice from bringing down the hammer. The Justice Department sued Volkswagen for as much as $48 billion for allegedly violating U.S. environmental laws; however, similar lawsuits are typically settled at a tiny fraction of the maximum amount. For more context, Volkswagen has already set aside more than $7 billion for fines and costs to repair the recalls, which is still not a chunk of change to sneeze at.

"The repositioning of the group will certainly take between two and three years, and is no child's play," Volkswagen CEO Matthias Mueller told the German magazine Wirtschaftswoche, according to Reuters.

For investors, this is obviously a difficult time to own Volkswagen stock. However, history shows that major automakers have been very resilient in the wake of major recalls. Toyota's "unintended acceleration," due to multiple problems with the gas pedal getting stuck, was responsible for many deaths between 2009 and 2011, but the company fixed the issue, paid its fines, and is now thriving. The story is the same with General Motors, which recalled more than 30 million vehicles in 2014 and is currently generating record profits. Compared to those two scenarios, Volkswagen's emissions cheating scandal isn't near as dire, and the company should rebound and remain one of the globe's top three automakers in terms of sales.

TrueCar implosion
TrueCar (TRUE -1.81%) looked the part of a young, innovative website-based company that could provide consumers with pricing transparency while providing automotive dealerships with cheaper and easily closable sales leads -- and investors with profits. However, in mid-to-late July 2015, the stock plunged roughly 40% in one trading day when TrueCar executives held a preliminary second-quarter conference call in which they warned that the company's loss would widen to as much as $15.5 million. Summarizing management's comments, the company basically dropped the ball by failing to turn its website prospects into sales.

Following the conference call, Goldman Sachs downgraded TrueCar to neutral, and removed the company from its "Americas Buy List." It also slashed its price target from $17 per share to $8. However, it wasn't just a poor second-quarter performance that made 2015 a rough year for TrueCar.

During a dispute with TrueCar and America's largest auto retailer, AutoNation, the two agreed to end their business partnership. TrueCar's president unexpectedly departed for greener pastures at Google, and CEO Scott Painter announced he would step down. TrueCar's implosion caused its stock price to plummet 56% during 2015 -- although the company has since gained a foothold, and posted a mostly reassuring third quarter. 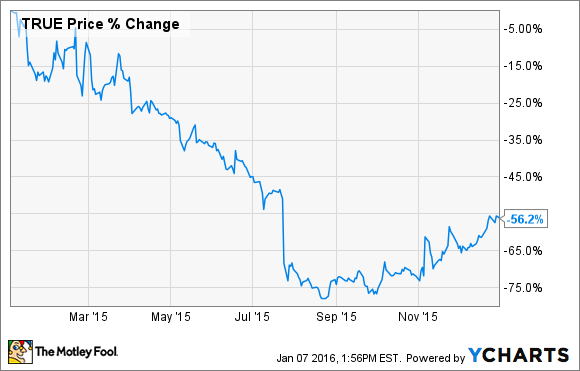 For investors, TrueCar's 2015 was extremely troubling. In a sense, TrueCar is the middleman between consumers searching its website and dealers looking for easy sales leads. When a dealership closes on a sales lead from TrueCar, and hopefully does so at a cheaper rate than other marketing and advertising tools would cost, it pays TrueCar a fee of roughly $300. In theory, everybody should win.

However, it's clear that dealerships still aren't thrilled with TrueCar's presence and believe the latter may not be offering enough value to dealerships as a middleman. This is a relationship that TrueCar is primarily focused on fixing throughout 2016. If TrueCar can't repair its rocky relationship with its dealer network, a full rebound in the company's business will be in jeopardy. Stay tuned: TrueCar's fourth quarter will give much insight as to what 2016 holds for investors of the California-based company.