What: Shares of Qualcomm (NASDAQ:QCOM) declined by 32.8% in 2015, according to S&P Capital IQ data. Revenue and profit slumped during the year, driven by a decline in chip sales, and ongoing problems with licensing in China have stunted the company's lucrative licensing business. 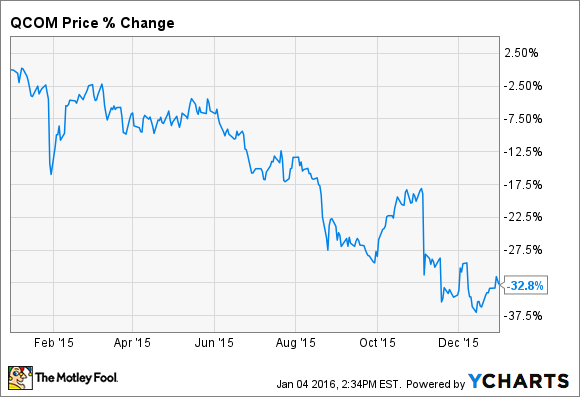 So what: Qualcomm operates two segments: Qualcomm CDMA Technologies, or QCT, which designs products like app processors, and Qualcomm Technology Licensing, or QTL, which is responsible for monetizing the company's vast collection of patents and intellectual property. QTL produces a majority of Qualcomm's profit, and on a pre-tax basis QTL profits increased by 4% in 2015.

QCT, however, suffered an 8% revenue decline and a 35% decline in pre-tax profit. Overall, the company's revenue fell by 5%, with pre-tax profits plunging 26%. A combination of factors has hurt Qualcomm's QCT segment, including market share gains by Apple at the high-end of the smartphone market and Samsung choosing its own processors for some of its smartphones.

On the licensing side of the business, Qualcomm has had trouble signing royalty agreements with major Chinese OEMs. Qualcomm receives a payment for every device shipped that uses its technology, but the company faced delays signing Chinese OEMs. The company has recently shown progress in this area, but a combination of licensing woes and slumping chip sales pushed the stock down throughout 2015.

Now what: With Qualcomm facing increasing competition in the app processor market, particularly from Asian companies like MediaTek, as well as consolidation in the high end of the smartphone market and a general slowdown in smartphone sales, Qualcomm's chip business may not improve any time soon. The licensing business is in a much stronger position, despite its recent issues, and this puts somewhat of a floor on Qualcomm's earnings. With the stock at its lowest level since 2011, and with a dividend yield of nearly 4% as a result, Qualcomm deserves a look from long-term investors.