Please ensure Javascript is enabled for purposes of website accessibility
Log In Help Join The Motley Fool
Free Article Join Over 1 Million Premium Members And Get More In-Depth Stock Guidance and Research
By George Budwell - Jan 10, 2016 at 8:18AM

George Soros' now famous quote regarding the "unpredictable nature of the stock market" is timely advice that investors should keep in mind heading into 2016.

In the second half of 2015, the market's mood swung wildly as a result of myriad headwinds such as crashing oil prices, the political uncertainty within the U.S., and the emerging global threat of ISIL. Despite a decent start to the year, for instance, the S&P 500 finished the year essentially flat, according to data provided by S&P Capital IQ: 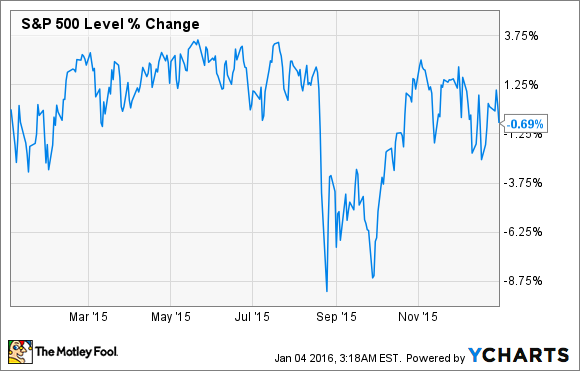 The bad news is that these issues don't appear to be fading away anytime soon, implying that 2016 could be another volatile and overall weak year for the markets in general.

Before stashing your cash under your mattress, though, it's worthwhile to keep the following quote from the controversial billionaire and hedge fund guru George Soros in mind:

The financial markets generally are unpredictable. So that one has to have different scenarios. ... The idea that you can actually predict what's going to happen contradicts my way of looking at the market.

While some may not agree with Soros' political views, his track record as an investor is second to only perhaps the legendary Warren Buffett, giving immense weight to his thoughts on market dynamics. During his tenure as the head of the Quantum Fund, for example, he averaged returns for investors in excess of 30% per year, cementing his reputation as one of the greatest hedge fund managers of all time.

Why should investors keep this particular quote in mind as 2016 unfolds? The first thing to understand is that unlike classic value investors like Warren Buffett and Ben Graham, Soros views the markets as a poor predictor of actual value.

Instead, his investing philosophy centers around the notion that irrational behavior often governs the markets in general and stocks in particular. Therefore, Soros' key insight via this quote is that what should happen within the confines of the stock market rarely does, and vice-versa.

Biotech stocks are a prime example of Soros' counterintuitive view
Ever since 2010, analysts and pundits alike have been calling the rapid appreciation of everything biotech a "bubble," implying that these stocks as a whole are dangerous. If you listened to their warnings, however, you would have missed out on one of the strongest bull markets in history. 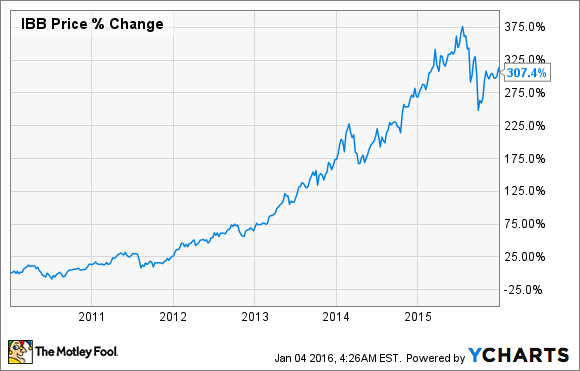 Although valuations across the industry have undoubtedly gotten frothy during this period, the market hasn't paid much attention, assigning numerous clinical-stage companies market caps in excess of $1 billion. The bottom line is that the market hasn't exactly reacted as one would predict in regards to biotechs of late.

A deeper look into the individual names within biotech, though, further shows the wisdom of Soros' words.

Gilead Sciences (GILD 0.65%), for example, should have been a top-performing biotech in 2015 based on its projected 30% revenue growth and 12-month trailing P/E ratio of a mere 9.2. Even so, it still underperformed the broad-based iShares Nasdaq Biotech ETF last year: 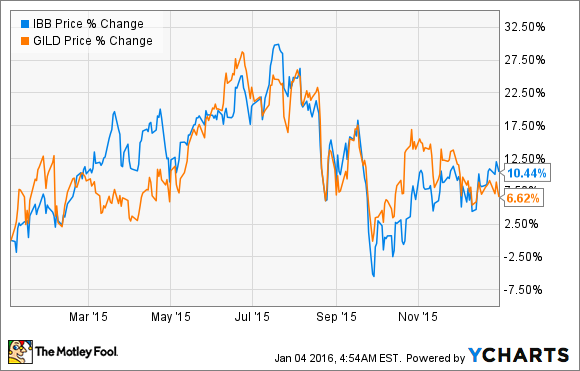 In short, Gilead didn't perform as many were expecting in 2015.

Now, let's take a look at the performance of the small-cap cancer drugmaker Exelixis (EXEL -2.27%) in 2015. Last year, Exelixis turned out to be one of the top-performing biotech stocks because of the late-stage success of Cometriq as a second-line kidney cancer treatment, along with the regulatory success of its melanoma treatment Cotellic that's being co-developed with Roche.

So, despite having negative cash flows and a weak overall financial outlook for 2016, Exelixis' shares gained more than 240% in 2015, crushing the broader biotech industry: 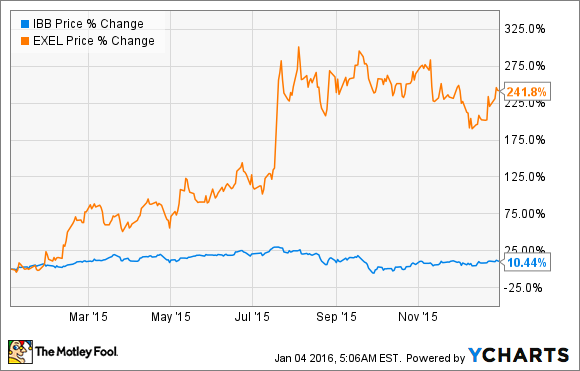 By all rights, Gilead should have easily outperformed a company like Exelixis -- that is, if the market was actually a good reflection of value. But the opposite occurred, demonstrating the unpredictability of the stock market.

After all, Exelixis has yet to book a single sale from Cometriq's proposed label expansion, and there's no guarantee its commercial launch for this indication will live up to expectations. Put simply, history may end up showing that the market's enthusiasm for Exelixis in 2015 was largely unwarranted from a valuation standpoint -- an all too common trend among small-cap drugmakers.

Key takeaways
As we kick off 2016, these global geopolitical and economic headwinds would seem to indicate that stocks are in for a tough time. Soros' advice, however, illustrates why investors shouldn't bother trying to predict how the market is going to perform in any given time period -- regardless of the overarching marcoeconomic environment. Not many people, after all, thought Exelixis would blast northward, and Gilead would lag behind other leading biotechs in 2015.

So, as Soros' now famous quote suggests, investors would probably be best served by preparing themselves to both take advantage of any dips in the market, and staying invested at the same time in case the market does the unexpected -- yet again -- this year.