Please ensure Javascript is enabled for purposes of website accessibility
Log In Help Join The Motley Fool
Free Article Join Over 1 Million Premium Members And Get More In-Depth Stock Guidance and Research
By Anders Bylund - Jan 10, 2016 at 6:45AM

A new name, a new structure, and a brand-name CFO all helped the company formerly known as Google crush the market in 2015. 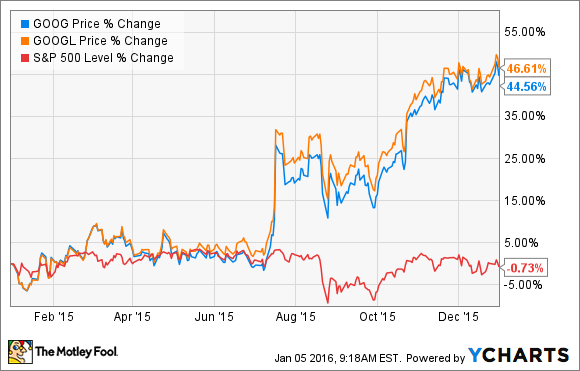 So what: Apart from giving Wall Street's earnings estimates a sound beating in the last two quarterly reports, the company did two things in 2015 to inspire shareholder confidence:

Now what: In the chart above, you see Porat's influence making waves in the middle of July. Yes, Alphabet beat analyst targets in that second-quarter report, but more important, that's when Porat laid out her cards.

Under Ruth Porat's steady hand, the company is now managing its expenses with a lot more fiscal restraint. It's not pure cost-cutting, but a more responsible approach to making new bets and hiring people. The company has also warmed up to the idea of shareholder-friendly initiatives, authorizing a $5 billion stock buyback program in October.

We'll also have more reason to appreciate the Alphabet makeover:

We expect Other Bets to include among others Access and Energy, Nest, Life Sciences, our investment arms and X, which is where driverless cars and certain other incubation efforts reside. Specifically, we intend to disclose -- for both Google and Other Bets -- revenues, profitability, and CapEx.

In other words, the new structure lets Google/Alphabet provide more transparency and more detailed financial reports, aside from making business moves not related to online operations without spooking shareholders.

And that's how Google became Alphabet and crushed the market in 2015.