Dividends and safety are a winning combination, and here are four places you can find both.

Dividends and safety are an excellent combination for long-term investors, and safe stocks with high dividends are the best kind of all. Unfortunately, many high-paying stocks are volatile and risky -- the exact opposite of what long-term investors want.

To help you sort through all of your options, four of our contributors would like to tell you about high-paying dividend stocks that will let you sleep soundly at night.

Sean Williams: High-yield dividends can be tricky, because if a payment isn't sustainable, or if a company's business model is in jeopardy, and the only reason a yield has been rising is because the share price has been falling, there could be problem. For healthcare-based real estate investment trust HCP (PEAK 0.11%) there is no problem. This looks to be a perfectly safe dividend that you can trust over the long term.

HCP is a REIT that owns and leases out buildings in the healthcare field. These include skilled nursing and long-term care facilities, life sciences and biotech research offices, and hospitals. It's the perfect play (on paper) to take advantage of an aging U.S. population. Based on data from the U.S. Census Bureau, between 2010 and 2050, the number of senior citizens in the U.S. is slated to double from 39 million to about 79 million -- and since the elderly require the most care, they're a logical audience for the healthcare industry.

In short, demand won't be an issue, and that's great news for HCP since it means it should have no trouble (as a whole) matching or outpacing inflation when it comes to hiking its lease rates. The company has witnessed a little weakness in skilled nursing non-operating income of late, potentially tied to cloudiness surrounding Medicare reimbursements for its lessees. However, strong growth in drug pricing via life science non-operating income growth and steady growth in senior housing are more than making up the difference.

HCP is also the only REIT that's a Dividend Aristocrat. Dividend Aristocrats are a group of roughly 50 companies that have raised their annual payouts for at least the past 25 years. With HCP's 3.7% dividend hike announced in October, HCP upped its streak to 30 consecutive years, and it put the company on pace to pay in excess of 6% next year. I believe this is a dividend stock income seekers can trust.

George Budwell: GlaxoSmithKline (GSK -0.64%) is in the midst of a major transformation as the drugmaker pivots to its next-generation of respiratory drugs like Anoro and Breo Ellipta, and it places a heavier emphasis of vaccines to drive top-line growth heading into the latter half of the decade. As a refresher, Glaxo has been seeing its bottom and top lines fall over the last few years because of eroding sales of its flagship COPD drug Advair, combined with the slower-than-expected commercial launch of its newer respiratory medicines. The net result is that Glaxo's shares have fallen by over 4% this year: 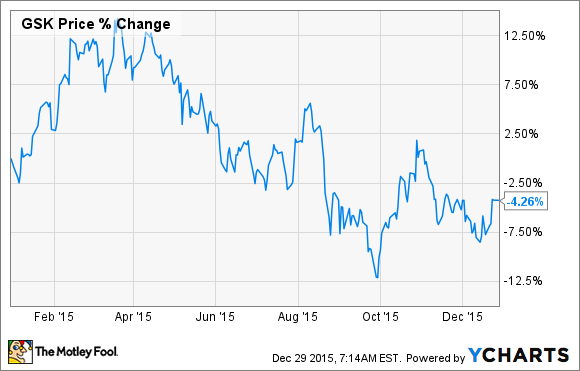 On the bright side, Glaxo now offers one of the highest dividend yields in the entire healthcare sector -- at 5.8% -- as a result of its declining share price. Despite this comparatively high yield, though, the drugmaker does sport a fairly reasonable trailing-12-month payout ratio of roughly 39%, according to S&P Capital IQ.

So, with Glaxo expected to return to modest growth next year, its massive dividend payout should be safe for the time being -- that is, unless management decides to join the ongoing M&A frenzy. Fortunately, Glaxo's management has historically relied on organic growth via its own clinical pipeline or through collaborative agreements when it comes to bringing new products into the fold. As such, income-seeking investors shouldn't worry too much about the company suddenly slashing the dividend in order to divert its cash flows to M&A.

Selena Maranjian: Recently yielding 5.6%, Brookfield Infrastructure Partners L.P. (BIP 0.73%) owns long-lasting properties that deliver essential products and services worldwide. But let's get a bit more specific: It owns utility networks such as a coal terminal, about 6,700 miles of transmission lines in North and South America, and 2.4 million electric and gas connections, while delivering heating and cooling to North American and Australian customers and transporting and storing natural gas in North America. Its transportation assets include 30 ports, 2,000 miles of toll roads, and more than 6,000 miles of rail on four continents -- and it owns about 7,000 multipurpose communication towers, too.

Thus, Brookfield Infrastructure Partners isn't likely to go out of business anytime soon, as much of its income is predictable. (About 45% of its cash flow is regulated and 45% contractual.) Its businesses are well diversified operationally and geographically. Its management is forecasting long-term annual growth of about 10% for funds from operations, and long-term distributions-to-shareholders growth of 5% to 9%.

The company's revenue has tripled over the past five years, and net profit margins, which have fluctuated significantly, were recently above 10%. Brookfield Infrastructure is a master limited partnership (MLP), and it's likely to reward long-term investors with considerable income over time.

Matt Frankel: With a dividend yield of 5.5%, Physicians Realty Trust (DOC 0.00%) is a high-paying stock that I feel is a safe investment for the next several decades.

Admittedly, this REIT is relatively new, having completed its IPO in July 2013. However, there are a few reasons to be confident in its future, including favorable demographics, a smart strategy, and lots of growth opportunities.

Physicians Realty Trust owns 146 properties, mostly medical office buildings, with 5.4 million rentable square feet. Since going public, the company has invested aggressively, doubling its portfolio in 2015 alone. The company targets properties in the $10 million to $50 million range, which reduces competition from the larger healthcare REITs, and uses its existing relationships with physicians and hospitals to find attractive investment opportunities. And, since the $1 trillion healthcare real estate market is highly fragmented, there is no shortage of growth opportunities ahead.

Perhaps the most compelling reason I call this a "safe" stock is the favorable industry trends. For starters, national healthcare expenditures are on the rise and are projected to grow by 67% in the next decade, according to the census bureau. Additionally, the U.S. population is aging rapidly -- the 65-and-up age group is expected to double by the year 2060, and an older population translates into lots of demand for medical facilities.

While it's new and untested, I'm confident that Physicians Realty Trust will deliver market-beating returns to investors and a growing stream of income to investors for decades to come.