Rift and HoloLens are making their way into the world, but augmented reality could hold the greater potential. 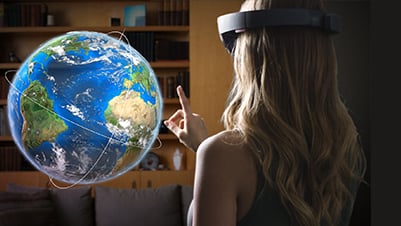 According to a number of well-read media outlets, 2016 should be the year virtual reality finally realizes its mass market potential. Understandably, investors are turning to companies with well-known VR initiatives like Facebook (META 1.70%), and Microsoft (MSFT 1.70%) to play this emerging trend.

Facebook's Oculus Rift beats Microsoft's Hololens to market
On Jan. 6, Facebook's wholly owned Oculus VR subsidiary began taking pre-orders for its Rift virtual reality headset. Though other names like Samsung have released their own smartphone-powered virtual reality headsets, Oculus' Rift headset will be the first VR-specific device to become available for consumers. Oculus says the price is $599 (not including tax and shipping) and it will ship to 20 countries starting March 28. Importantly, Facebook's Oculus will not include its Touch handset controller as part of the initial product rollout, a move some members of the analyst community criticized.

In contrast, Microsoft has allowed members of the developer community to pre-order its Hololens virtual reality rig for some time now, at a cost of $3,000 per unit. According to Microsoft, Hololens developer kits will begin shipping at some point during Q1 2016. When the Hololens will become available to the general public remains anyone's guess. We also can't be sure just how much Facebook's beating Microsoft to market will benefit the social networking giant and its virtual reality start-up. However, in looking at long-term industry sales projections, an important distinction also emerges that Facebook and Microsoft investors need to understand.

Virtual reality refers specifically to wholly immersive technologies like the headsets both Facebook and Microsoft will eventually sell to the masses. Augmented reality instead refers to a broader set of experiences where technology adds so-called "context layers" to our real-world experiences; think of the futuristic dashboards in Tom Cruise's car in Minority Report. That's AR: present, but not omnipresent.

Because of its incredibly immersive power, virtual reality stands to upend or meaningfully influence a number of sizable tech and communications verticals like gaming, movies, phone and video calls, and the like. However, since wearing the headsets that will power the VR experience by definition cuts users off from the world around them, they are somewhat solitary in nature.

On the other hand, augmented reality's place as a "layer" atop our daily lives appears more broadly applicable to a seemingly endless host of consumer and enterprise applications. Framed another way, of the $150 billion market estimate mentioned earlier, it's likely the majority of that spending will be allocated toward AR applications.

Given Facebook's inherent placement as a communication medium and Microsoft's multibillion-dollar Xbox gaming division, virtual reality applications should prove particularly well-suited to complement their specific business models. So, while the virtual reality market opportunity might prove crucially smaller than many estimates initially appear, Facebook and Microsoft will likely still benefit plenty from this emerging tech trend.

Andrew Tonner has no position in any stocks mentioned. The Motley Fool owns shares of and recommends Facebook. Try any of our Foolish newsletter services free for 30 days. We Fools may not all hold the same opinions, but we all believe that considering a diverse range of insights makes us better investors. The Motley Fool has a disclosure policy.