Low interest in the company's tender puts investors in a good mood.

What: Shares of Theravance Inc (NASDAQ: THRX), a healthcare royalty company, put up another greatly monthly performance as the company's stock moved more than 14% higher during the month of December, according to data from S&P Capital IQ. 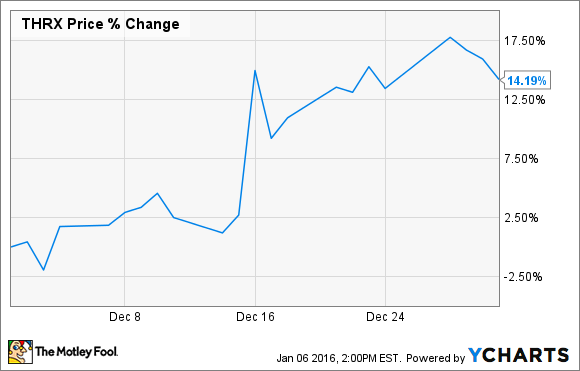 So what: The only news the company released during the month was the preliminary results of its previously announced tender offer that it authorized in October. At the time, Theravance thought its stock was deeply undervalued, and made the decision to stop paying a dividend and use the capital to repurchase its shares, choosing to do so via a modified Dutch action. The company had authorized itself to repurchase $75 million worth of its common stock from investors that were interested in selling at a price between $8.50 and $9.25. Shareholders who wanted to take part had to indicate how many shares they wanted to sell and the lowest price they were willing to accept. Theravance would then buy back up to $75 million shares at the lowest price offered.

The preliminary results showed that investors were not very interested in selling at that price, as only 2.5 million shares were tendered for a total value of about $24 million. That's less than a third of what the company had authorized, indicating that its investors felt its shares were still undervalued.

Now what: Theravance's stock has bounced back strongly since crashing in September after its partner GlaxoSmithKline (GSK 0.84%) announced that a phase 3 trial designed to evaluate Relvar/Breo Ellipta's ability to reduce the risk of cardiovascular death in COPD patients failed to demonstrate statistically significant results. Given that the majority of Theravance's revenue is directly tied to GlaxoSmithKline's ability to sell Relvar/Breo Ellipta, many traders saw the news and simply headed for the exits. If the trial had shown better clinical news, GlaxoSmithKiline would have had an easier time selling Relvar/Breo Ellipta, which would have benefited Theravance directly.

While the markets have been cheering Theravance's stock in recent months, I continue to believe it still has too much debt on its balance sheet. Until that changes, I'm content to stay far away from this stock.