These stocks may have overstayed their welcome in your portfolio.

At The Motley Fool, we are all about long-term investing in the best companies around. On the other hand, there is nothing wrong with selling when the business fundamentals are deteriorating, or if you just don't think the company is strong enough to deserve your hard-earned money. With this in mind, in this roundtable our contributors share with our readers three companies that may be worth selling.

Andres Cardenal: Retailers in general and department stores in particular are facing an enormously challenging environment, especially when it comes to companies lacking brand power or product differentiation. Pricing competition among brick-and-mortar retailers is remarkably aggressive, and the e-commerce revolution is making things even harder for companies in the industry.

Sears Holdings (SHLDQ) has been delivering worrisome financial performance for years now, and it's impossible to say when or how management can turn the business around. Both sales and profit margins are moving in the wrong direction, and Sears' latest earnings report doesn't provide much reason for hope. 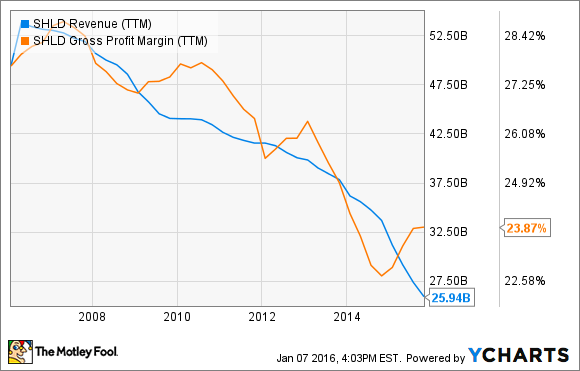 Comparable sales at Kmart and Sears Domestic declined 7.5% and 9.6%, respectively, during the third quarter of 2015. The company reported an operating loss of $382 million during the quarter, and adjusted EBITDA was also negative to the tune of $280 million.

As of Oct. 31, 2015, Sears had approximately $1.3 billion of liquid assets, including $294 million in cash and $963 million under its credit facility. However, short-term liquidity is hardly a good enough reason to invest in a company which seems to be deteriorating and destroying shareholder value.

Brian Feroldi: One stock that I own and may part ways with is SodaStream International (SODA). SodaStream was promising when I bought shares years ago, as its international markets were generating impressive cash flow.  At the time, it was also beginning to enter the United States' massive consumer market. Given its razor-and-blades business model, if the company's machines could find a place in just a small fraction of U.S. households, its stock could have easily turned into a multibagger.

Unfortunately, that thesis didn't work out so well, as SodaStream has struggled to penetrate the U.S. market. With soda consumption on the decline, SodaStream is now repositioning itself as a sparkling beverage company -- though, the market has yet to take note. Sales and profits continue to move sideways and -- as I know firsthand -- its stock has collapsed.

SodaStream was a once-promising growth story that didn't play out as I'd hope. It's very possible that I'll dump my shares in the years ahead, and I recommend that others steer clear.

Daniel Miller: Sprint Corp. (S) is burning through cash and, in my opinion, is in the worst financial shape of the four major wireless carriers - the other three being AT&T, Verizon, and T-Mobile.

Sprint faces a number of hurdles and has little room for error. After a decade of poor performance and a deteriorating brand image, it will be difficult for the company to improve customers' perception of its services. That's one reason subscribers have been fleeing the company for seven years, despite adding users during the past few quarters.

Because Sprint has had a difficult time retaining consumers, reinvesting in growth has become much more difficult. Furthermore, without the financial resources of its competitors, it has fallen behind AT&T and Verizon's push with LTE technology.

If Sprint can defy the odds and rebuild its business and brand image, as well as find an effective way to grow, investors could grab shares today at a cheap price. However, that seems far-fetched. Sprint currently trades 34% below its 52-week high and has 28% of its float short for a reason. I'd be selling if I owned.

Andrés Cardenal has no position in any stocks mentioned. Brian Feroldi owns shares of SodaStream. Daniel Miller has no position in any stocks mentioned. The Motley Fool owns shares of SodaStream. Try any of our Foolish newsletter services free for 30 days. We Fools may not all hold the same opinions, but we all believe that considering a diverse range of insights makes us better investors. The Motley Fool has a disclosure policy.