Windows 10 is off to a good start. Microsoft (NASDAQ:MSFT) announced the cross-platform operating system has been installed on 200 million devices around the world just over six months since its release. By comparison, Windows 8 reached just half the number of devices in the same timespan.

Of course, a large part of that adoption rate could be attributed to the fact that Windows 10 is offered as a free upgrade for Windows 7 and Windows 8 users. It's also available on smartphones, extending the reach of the OS.

Adoption is going well for Microsoft, but let's dig deeper into the numbers. Here are three things investors should know about Windows 10 adoption.

1 billion devices by 2018
Last Spring, Terry Myerson, Microsoft's VP of Operating Systems, told attendees of the company's annual Build conference, "Within two to three years of Windows 10's release, there will be 1 billion devices running Windows 10." For all intents and purposes, that timeline extends to the end of 2017.

After strong early adoption, things are already starting to cool. Microsoft says the rate of adoption has accelerated since Black Friday, but the pace between October and January didn't even match installs in September. Likely, many users simply upgraded their devices after Black Friday, and these are not new active users.

Reaching 1 billion devices by 2018 is still possible, though. Microsoft says it's currently piloting Windows 10 with 76% of its enterprise customers, and they account for just 22 million devices. That's a significant expansion from the 1.5 million enterprise devices using Windows 10 back in August (when there were 75 million reported installs). If Microsoft can continue to successfully convert enterprises to Windows 10, it will surely reach 1 billion installs by 2018.

The Windows Store
The key strategy with giving Windows 10 away was to monetize it on the back end with a revamped Windows Store. So far, that strategy appears to be working. 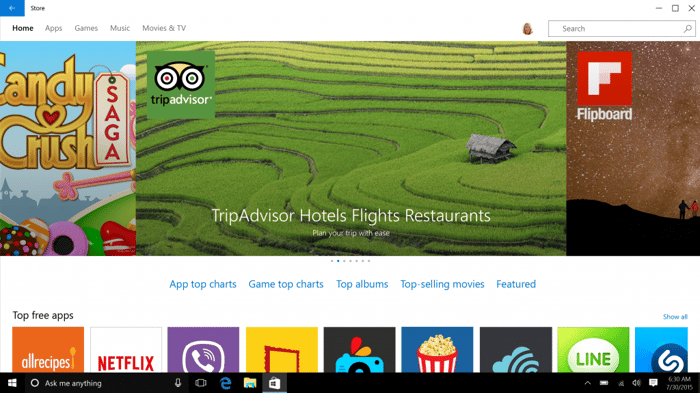 Microsoft reports that the Windows Store saw twice the number of paid transactions this holiday season compared to the year before. What's more, Windows 10 devices generated 4.5 times the revenue per device in December compared to Windows 8. This is a very encouraging trend for Microsoft, but the company isn't giving details into how much revenue the Windows Store is actually generating.

Additionally, Microsoft says that more people are trying out the Windows Store to see what it has to offer. Sixty percent of paying customers last month were new to the Windows Store. The expanding audience and the improved revenue trend ought to encourage more developers to put their apps in the Windows Store, which is one of the big goals for Microsoft with Windows 10.

Bing
Another factor to consider with Windows 10 is how it impacts Bing usage. Microsoft's press release notes that Windows 10 users perform 30% more Bing searches compared to other Windows users.

Bing benefits from the inclusion of a search bar in the bottom corner of Windows 10's taskbar. Microsoft has also taken steps to integrate Cortana -- its digital assistant -- which is powered by Bing, leading to more Bing searches.

When Microsoft reported its earnings for the first quarter of fiscal 2016, it said that Windows 10 users accounted for 20% of Bing revenue in September. At the time, Windows 10 only accounted for about 6.6% of all PCs in use. That implies that Windows 10 users generate 3.5 times as much revenue for Bing compared to non-users. With the number of installs roughly doubling since that report, look for further profitability from Bing when Microsoft reports its second-quarter results later this month.

While Windows 10 is off to good start, it remains to be seen whether it can maintain this pace of adoption, or if it will start to fall off considerably, as it's already showing signs of slowing. Once users install Windows 10, they're doing exactly what Microsoft had hoped -- downloading apps from the Windows Store and searching using Bing. But if Microsoft doesn't reach its 1 billion device target, it will have to outperform expectations on those two behaviors.