The Mexican chain has lost customers and seen its stock plummet after a number of E. coli and Norovirus incidents in its stores.

The company has been besieged by bad news after being hit with a string of reports that consumers got sick after eating in its restaurants. In some cases -- including one in California and a larger one in Boston -- the alleged culprit was Norovirus. In the others, which the Centers for Disease Control said affected 53 patrons in nine states, the cause was Escherichia coli O26 (E. coli).

In addition the company has been hit with a federal subpoena as part of a criminal investigation being conducted by the U.S. Attorney's Office for the Central District of California, working with the Food and Drug Administration's Office of Criminal Investigations in association with possible Norovirus issues in a Simi Valley, California store. To comply Chipotle must produce a range of documents to help the investigators determine whether there has been any criminal wrongdoing.

None of this has been good for the company's business. E. coli and Norovirus, which both can cause severe gastrointestinal distress, are very low on the list of things any restaurant chain wants to be associated with. Even the hint of potential food poisoning can cause customers to flee and that has happened in this case.

Because of the scares the Mexican chain has had to temporarily close some stores. It has also been forced to tighten up its safety standards and examine some of its suppliers. This, as you might image, has been been bad for customer traffic and for the company's stock price.

Chipotle issued a statement in early January saying that "sales at restaurants open at least a year slid 30% in December and fell 14.6% during the fourth quarter," USA Today reported. That has been pretty lousy for its stock price which has fallen more than a third in the last 12 months. 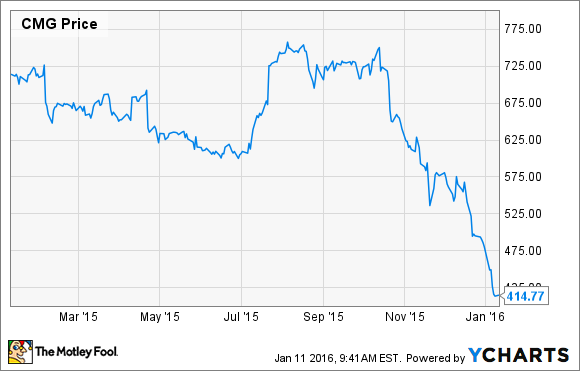 The company is taking steps to correct the issue and assure the public it has things under control. Three Fools have different opinions on how that will work out:

Keith Noonan (Accentuate the positive): Chipotle's food-born illness scandal is a big deal. It doesn't mean the company is doomed, or that it won't be able to turn things around, but it is damaging aspects of the burrito giant's core appeal.

The brand relies on the idea of a cleaner, healthier fast food alternative, and that concept loses its pull when the big story is Chipotle's E. coli woes. Now is not the time for the company to tout its laurels. It needs to get its food supply chain and health issues nipped in the bud first, but refocusing attention to the positive aspects of the brand and business will be crucial after the current controversy wanes.

Oddly enough, Chipotle might look to McDonald's (MCD 0.20%) for inspiration on how to navigate its current troubles. The Golden Arches struggled with food contamination issues that dogged its sales and brand in 2014 and 2015, but it responded with visible supply changes and a varied, but cohesive, advertising front that worked to soften negative perceptions and highlight the positive aspects of the business.

Once Chipotle has its new suppliers in order and the heat of the current scandal has died down, returning to pointing out the socially conscious, health-oriented elements that distinguish the company will be a crucial part of returning to the right track. Whether that means showcasing the positives elements of its new suppliers or highlighting and improving employee relations and social outreach, or some combination thereof, Chipotle should look to accentuate its positives when the moment is right.

Rich Duprey: (Keep doing what it's doing): It's hard to think Chipotle can do any more than it already has. From the beginning of the outbreak, the Mexican food chain has been cooperative, responsive, and transparent.

Consider: when the outbreak was first reported, it shut down 43 stores in the affected market even though only 11 were identified as a problem. Any ingredient that might have been a possible source was eliminated. It sanitized everything and increased its safety testing across the entire chain. And all the while it has kept regulators, investors, and customers apprised of every step it's taken and the costs it may incur.

The problem for Chipotle is that even health officials don't yet know the source of the outbreak. Unlike what happened when Costco (COST 0.60%) suffered almost a simultaneous e. coli outbreak and the CDC was able to pinpoint its derivation to contaminated celery, they still don't know what is responsible for Chipotle's outbreak. So it's fair to ask, what more can Chipotle Mexican Grill do?

That's why my recommendation is do nothing. Or rather, more of what it's been doing. The restaurant has been a model of rectitude in this episode, which goes back to its commitment to serve "Food With Integrity." While there's a certain irony in its being brought down by a food quality issue, the fault at this point doesn't seem to lie with Chipotle and it can only hope to get beyond this crisis of confidence by continuing to adhere closely to its core principles. It's best course of action therefore, is not to change course. Keep being open, honest, and cooperative and it will regain the trust of consumers who come to appreciate the transparency with which it operates.

Daniel B. Kline (Be really patient): Historically, time heals all consumer trust issues when it comes to fast-food chains as long as the company shows proper contrition and solves the problem. That was certainly the case with McDonald's as Keith points out above and it was even true during the most famous tainted product scandal of all time -- the Tylenol cyanide murders of 1982.

In that case people were actually dying due to a product which had been tainted (by an outside person, not through any fault of the company). But, when the culprit was caught and steps were taken to make bottles harder to tamper with, the product recovered. Now, few, if any, people worry about taking the popular pain reliver.

For Chiptole, this too shall pass, but it may be made to suffer for longer than McDonald's would or Costco has been. That's because neither of those two chains have built their business on offering better food. Chipotle markets "food with integrity" and highlights its lack of chemical use, local sourcing, and other things which are generally considered good.

But, those positives are a bit of a negative here both from a segment of the public which likes seeing a company that purports to be better get its comeuppance and because those things make damage control harder. Chipotle does source locally and it does use food that is in a more natural state than other chains. Real food has a higher potential for things like E. coli.

That's true in your kitchen or in a nice restaurant too. A McNugget won't give you food poisoning because its heavily processed. Chicken at Chipotle however is just chicken breast, cut up, and cooked by an actual person. Taking the margin of error out of that process is harder and the company will struggle to convince people it's a safe place to eat.

Chipotle will come back because its product is too good for people to stay away for long, but the suffering in stock price and customer traffic may be drawn out.