Please ensure Javascript is enabled for purposes of website accessibility
Log In Help Join The Motley Fool
Free Article Join Over 1 Million Premium Members And Get More In-Depth Stock Guidance and Research
By Sean Williams - Jan 11, 2016 at 10:02AM

The promise of Geron's lead experimental drug sent its shares notably higher last year, but can the good times continue in 2016? 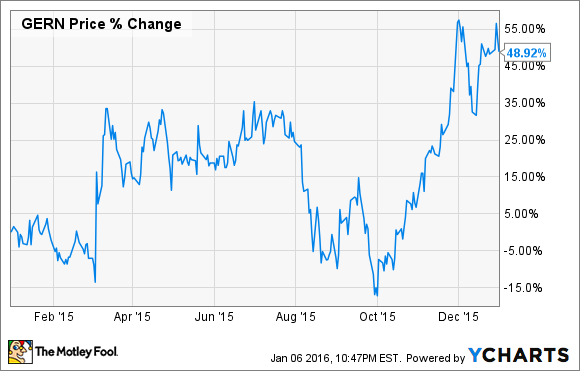 Shares of Geron (GERN 14.63%), a clinical-stage drug development primarily focused on the development of therapies to treat cancer, exploded higher by 49% in 2015, based on data from S&P Capital IQ, largely because of high hopes attached to lead drug imetelstat.

Imetelstat is a first-in-class telomerase inhibitor that's being targeted at an array of disease indications, including myelofibrosis (a rare cancer of the bone marrow that can lead to scarring), myelodysplastic syndrome, and essential thrombocythemia. What makes imetelstat such an intriguing therapy has been its efficacy in myelofibrosis (MF) studies.

Currently, there is just a single drug approved to treat MF -- Jakafi/Jakavi, which was developed by Incyte (INCY 0.31%) and licensed to Novartis (NVS 0.12%). Jakafi is a JAK2 inhibitor that is designed to reduce the severity of symptoms associated with MF, such as an enlarged spleen and anemia. The one thing Jakafi can't do is actually provide any degree of remission for MF patients, which could ultimately mean that Incyte's and Novartis' hold on MF could be short-lived if imetelstat is successful.

In previous clinical studies, imetelstat was shown to have provided partial and complete responses in MF patients -- something that was previously not observed in any other clinical study. Of course, there were also safety concerns with imetelstat relating to liver complications and whether the drug could be administered over the long term. After a brief clinical halt, imetelstat was given the all clear by the Food and Drug Administration to continue testing. In December at the American Society of Hematology's annual meeting, Geron announced that all 18 evaluable patients in its essential thrombocythemia study exhibited a hematologic response, with a whopping 16 patients exhibiting a complete response. The responses were typically rapid and sustained, but safety and tolerability remain the long-term question marks for Geron.

Also working in Geron's favor is the licensing deal it signed with Johnson & Johnson (JNJ -1.10%) for imetelstat. The deal gave Geron $35 million up front and the potential to earn up to $900 million more in development, regulatory, and sale-based milestone payments. Johnson & Johnson has a knack for picking small-cap companies with potential blockbuster drugs, and having its subsidiary, Janssen Pharmaceuticals, in Geron's corner is a big deal if the drug is eventually approved.

What can Geron shareholders expect in 2016? It's tough to tell because everything is dependent on the event horizon of its phase 2/3 IMerge study for myelodysplastic syndrome patients and phase 2 IMbark study for MF patients. It's possible we could have a top-line data readout perhaps as soon as Q4 2016. However, I wouldn't expect a big move in either direction until we get data from these studies, likely in the range of 12 to 24 months.

Investing in Geron comes with the risk of non-diversification (almost everything revolves around imetelstat's potential), but the possibility for imetelstat to become a blockbuster makes it a watchlist-worthy stock.