Traders are dumping shares after news broke that the company won't be providing a clinical update on its lead compound until the later half of the year.

What: Shareholders of bluebird bio (BLUE 3.04%), a clinical-stage biotechnology company with a focus on gene therapy, are having another rough day as the company's stock has shed nearly 18% of its value as of 12:15 p.m. EST after the company shared a new presentation with investors.

So what: While company won't be officially giving the presentation until tomorrow, traders have already had a chance to review the slides and are reacting harshly to what they see. The news that appears to have caught them off guard is that bluebird will not be providing another update on how LentiGlobin BB305 is progressing clinically until the next American Society of Hematology meeting. In each of the last two years, bluebird bio has released clinical updates in June, so the market isn't happy about having to wait an additional five months to see updated data.

Add in the fact that the biotech market in general is having a rough day -- the SPDR S&P Biotech ETF (XBI -3.05%) has shed nearly 5% of its value today -- and its easy to why shares are getting slammed.

Now what: Wall Street has been hammering bluebird bio stock for several months now, as shares have shed more than 77% of their value since their summertime highs. 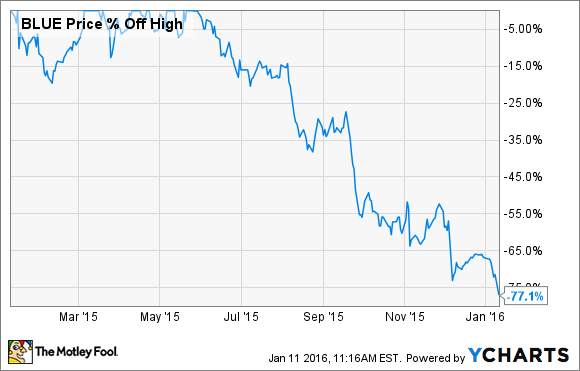 Wall Street hasn't been impressed with the news stream from the company for some time now, and the most recent clinical update for LentiGlobin BB305 reported in November only added fuel to that fire. The update showed the therapy might not be the cure many investors were assuming it would be, as it indicated that LentiGlobin might be an effective treatment only in patients with milder cases of beta-thalassemia, which investors believe might curtail its market potential. The news caused many analysts to slash their price targets for the shares, which has created a lot of selling pressure over the past few months.

On the plus side, the company still has a war chest stuffed with more than $900 million in cash, which the company believes should be enough to sustain itself into 2018. That gives the company plenty of time to advance LentiGlobin down the clinical pathway.

Watching shares sell off again is never fun, but if you're a believer in the long term potential of bluebird bio's technology and are willing to be very patient, then today's sell-off could represent a buying opportunity.

Brian Feroldi has no position in any stocks mentioned. The Motley Fool recommends Bluebird Bio. Try any of our Foolish newsletter services free for 30 days. We Fools may not all hold the same opinions, but we all believe that considering a diverse range of insights makes us better investors. The Motley Fool has a disclosure policy.