Please ensure Javascript is enabled for purposes of website accessibility
Log In Help Join The Motley Fool
Free Article Join Over 1 Million Premium Members And Get More In-Depth Stock Guidance and Research
By Jeremy Bowman - Jan 11, 2016 at 11:11AM

The supermarket giant has been a big winner on the market for the last few years. Let's take a look at what it needs to keep winning.

For years Kroger Inc (KR 0.94%) was a sleepy stock, humming along unremarkably and generating a modest dividend. But three years ago it started breaking out, thanks to a shift in strategy. In 2013, the stock was up 52%; in 2014, it jumped 62%; and last year it added another 30%, more than tripling in value over the course of three years.

Before we answer that question, let's look back at how the stock became a surprise winner to gain some insight.

A diamond in the rough
A number of factors contributed to Kroger's charge, including efforts to lower prices, its focus on the customer, a push into organics and higher-end products, and a savvy acquisition strategy.

As growth slowed in the 2000s due to efforts from drugstore chains and dollar stores to push into grocery sales, Kroger's sales begin to flatten. The company responded by lowering prices, even though it sacrificed profits to do so. Gross margin fell from 27.4% in 2002 to 20.6% in 2013, but sales nearly doubled during that time as the low prices fueled organic growth and expansion. Kroger's comparable sales have grown in every quarter for the last 12 years, a streak almost none of its competitors could lay claim to.

Its "Customer 1st" strategy, which it initiated in 2004, has helped it outgrow Wal-Mart Stores (WMT 0.25%), the nation's largest grocer. While Wal-Mart has always made everyday low prices its key selling point, Kroger instead decided to price competitively, but also offer more product variety, better service, and a more welcoming shopping environment. That strategy fed into its decision a few years ago to go more upscale and focus on organic foods. The company launched its Simple Truth organic line in September 2012, which became a $1 billion brand in just two short years, making it Kroger's best brand launch ever. It's no coincidence that the rise of Simple Truth has paralleled the rise of the stock as the success of the product line has caught the attention of Wall Street. It's also expanded its selection of gourmet products, adding things like fancy cheeses to attract wealthier shoppers.

Soon after, its 2013 acquisition of Harris Teeter added over 200 high-end stores to its portfolio as well as the proprietary knowledge that comes from purchasing a successful business. More recent acquisitions included Hiller's Markets and Roundy's. Purchasing existing banners instead of opening new stores eliminates the problem of oversaturation for Kroger. Nearly every major grocery chain has plans to open new stores. Whole Foods Market (WFM), for instance plans to triple its store count to eventually hit 1,200, while Wal-Mart has been adding hundreds of Neighborhood Markets a year -- but there is only so much room for growth within the industry as food budgets are a slow growth industry. By acquiring existing stores instead of building new ones, Kroger eliminates this problem.

Where the stock stands today
After a blistering run over the last three years, one might expand the stock's valuation to have gotten ahead of itself, but that's not the case. Kroger trades at a P/E of just 20, and over the last year that figure has held steady, as the chart below shows. 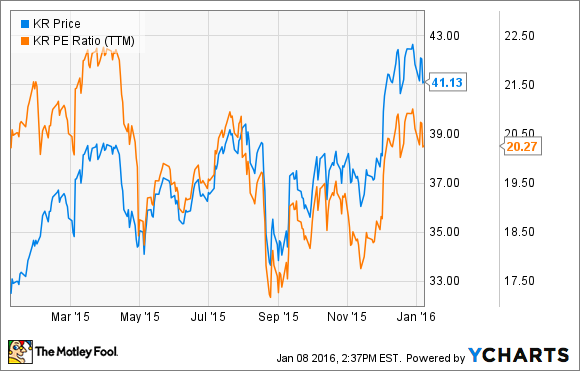 That means that earnings, not market euphoria, have been underpinning the stock's recent gains, a good sign for future growth. Kroger comes into 2016 having reported comparable sales growth of 5% or more in its last four quarters, and has consistently beat estimates and raised its forecast over the year. Analysts are expecting modest EPS growth of 9% next year, which is within management's long-term projection of 8-11% EPS growth. That view may be overlooking the strength of Kroger's business and its momentum.

Considering the company's recent history of beating estimates and its acquisition of Roundy's and its 151 stores just months ago, I wouldn't be surprised to see Kroger speed past the $2.24 EPS consensus for 2016. Though its days of soaring stock growth are probably over for now, I would expect Kroger to beat the market once again in 2016.