These four companies want smarter machines to do the heavy lifting.

Over the past few years, artificial intelligence platforms have become increasingly valuable to companies which want to process large amounts of raw data into actionable business strategies. Growing demand for these technologies has persuaded major tech companies to either develop or acquire machine learning platforms to remain competitive. Let's focus on four major movers in the space, and how AI platforms fit into their long-term growth strategies.

Apple
Apple (AAPL -0.14%) stock has fallen 20% over the past six months due to concerns that demand for iPhones could finally peak this year. Apple hasn't revealed a pipeline of new hardware products to replace the iPhone yet, but it notably acquired three AI-related companies over the past four months.

In October, Apple acquired VocalQ, the developer of a "self-learning dialogue platform" which can be used to create personal assistants which understand natural language questions and commands. That same month, it acquired Perceptio, a start-up which helps companies run advanced AI systems on smartphones without sharing a lot of user data. In January, it acquired Emotient, which develops an AI platform which can "read" human emotions from facial expressions. That purchase seemingly complements Apple's recent acquisition of Faceshift, which uses motion capture tech to turn real faces into life-like digital models.

It's unclear if Apple plans to weave these new AI services into Proactive, FaceTime, and Apple Music, use them to create augmented reality software and hardware, or integrate them into long-rumored hardware projects like its electric car. However, investors should still keep a close eye on Apple's growing interest in AI this year to see where the company might be headed.

Amazon.com
Amazon's (AMZN -1.24%) AWS (Amazon Web Services) is currently the largest cloud as a service platform in the world, with an annual run rate of $7.3 billion as of last October. Its customers include NASA and the CDC, and it provides a wide range of cloud-based storage and analytics services.

Last year, Amazon added an AI platform called Amazon ML (Machine Learning) to AWS. The platform gathers data from services like S3 online storage, Redshift data warehousing, and its Relationship Database Service to "predict" future business trends for customers. For example, Amazon ML can predict how gender, income, and professions impact purchases of certain products at a retailer. These predictions can be used to shape future sales strategies. Amazon sells these analyses in batches at a rate of $0.10 per 1,000 predictions. With the expansion of the Internet of Things across connected homes, cars, and wearables, requests for Amazon ML's predictions will likely rise.

Last quarter, AWS revenues rose 78% annually and accounted for 8% of Amazon's top line on a constant currency basis. Morgan Stanley analyst Brian Novak believes that percentage could more than double to 17% this fiscal year as demand for AWS services soars. However, Amazon still faces stiff competition in this market -- IBM's Bluemix/Watson and Microsoft's Azure ML are still winning over plenty of enterprise customers.

Facebook and Alphabet
Last but not least, Facebook (META -2.03%) and Alphabet's (GOOG -0.55%) (GOOGL -0.61%) Google are both expanding into the AI market to increase their search and image recognition abilities. By understanding what their respective social network and search users are looking for, tagging, or uploading, both Internet giants hope to craft better targeted ads for their advertisers.

Facebook has established a dedicated division, FAIR (Facebook Artificial Intelligence Research), to accelerate the development of its facial, image, and speech recognition capabilities. Late last year, the unit unveiled a prototype version of M, a Siri-like personal assistant which formulates responses based on human-provided data across the social network.

Meanwhile, Google acquired four AI companies over the past year to beef up its machine learning capabilities. It also launched Photos, a stand-alone service with unlimited storage which can "intelligently" categorize photos by people, things, locations, and dates. On the hardware side, Google acquired military robot manufacturer Boston Dynamics in late 2013, and is currently testing driverless cars. Many of these machine learning and robotics technologies could further converge throughout 2016. 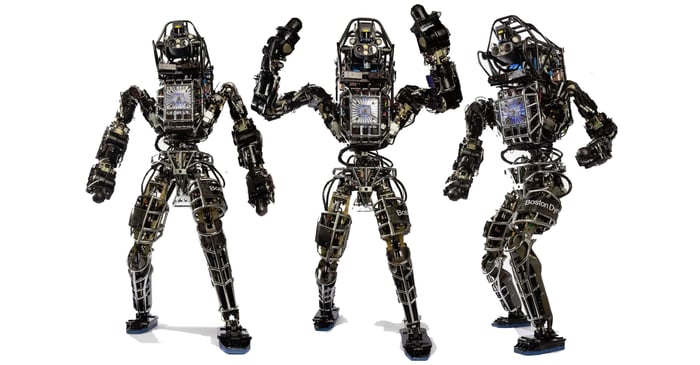 The bottom line
Artificial intelligence platforms haven't evolved into the sentient machines which are often seen in the movies, but their ability to process data into predictions, track human behavior, and "understand" images and sounds is impressive. Tech investors who are interested in this field should track Apple, Amazon, Facebook, and Alphabet throughout the year to better understand where this fledgling market is headed next.