This year will likely be marked by a continued overhaul of Facebook's Messenger.

As Facebook (META 1.88%) wrapped up 2015, the company's messaging service hit an impressive milestone: The number of users who use Messenger on a monthly basis crossed 800 million. This makes Messenger, a service the company separated from Facebook in 2014, one of the world's largest social platforms. But this is only the beginning for the service, according to a Facebook blog post last week.

"[800 million is] a good number, but we believe we have so much more opportunity ahead of us, and these are still the early days of Messenger," said Facebook's VP of messaging products David Marcus.

Looking back at Messenger's progress in 2015, and in light of the company's expressed ambitions for the product over the long haul, it's likely that Messenger could be the defining focus for the social network in 2016.

The growing importance of messaging
As 2015 went on, the world's largest social network began unveiling its aspirations for Messenger as its own separate entity from Facebook, even offering insights on how it planned to monetize the service.

Major feats for Facebook's Messenger during 2015 include speed enhancements, video calling, increased customization for conversations (colors, nicknames, emojis, etc.), the first steps in connecting businesses and consumers within the product, and more. The company even went as far as to allow people to sign up for the chat app without having a Facebook account.

During 2015, the product handily earned the right to be considered a separate entity from Facebook -- even if the product is still deeply integrated into the platform it was initially born into.

It wasn't just Facebook that recognized the growing value of cross-platform Internet-based messaging during 2015. Twitter (TWTR 0.99%) lifted the 140-charcter limit for its direct messaging last year and significantly beefed up the product's capabilities, introducing group messaging, and the ability to share tweets, photos, links, and emojis in a message. The smaller social platform even made it possible for Twitter users to opt in to receiving messages from anyone -- even if the messaging user isn't a follower. 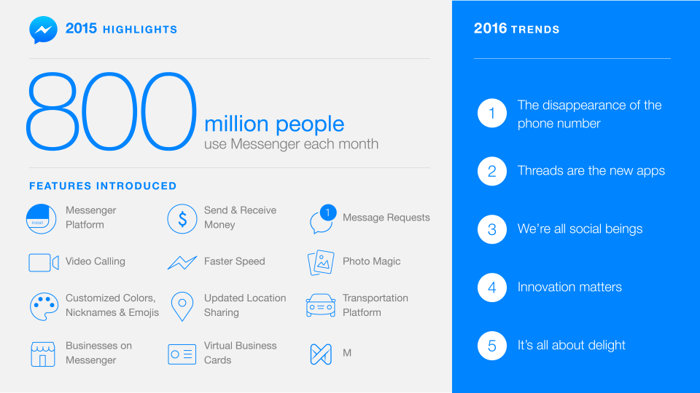 What's next for Messenger?
What trends can investors and consumers expect to see from Messenger in 2016? More business integration, artificial intelligence, and "delight."

Business integration directly into Messenger: Facebook is witnessing "a paradigm shift in how people engage," according to Marcus. This shift is one in which businesses and consumers are increasingly interacting in "threads" instead of apps. Said Marcus:

It is so much easier to do everything in one place that has the context of your last interactions, as well as your identity -- no need to ever login -- rather than downloading apps that you'll never use again and jumping around from one app to another. Our early tests in 2015 with brands are showing that interactions will happen more and more in your Messenger threads, so we'll continue making it easy for you to engage with businesses, and we'll also do more to enable additional businesses and services to build the right experience in conversations.

The rise of AI: Facebook's launch of personal assistant M, which is available for a limited audience in Messenger, signals the company's determined direction for AI integration into Messenger during 2016.

It's still very, very early days, but the growing AI capabilities are bringing unparalleled convenience to simple, every day tasks like booking a restaurant, sending flowers, and making plans. There will be more innovative developments to come from Messenger this year.

Messaging needs to be delightful: Internet messaging is now more feature-rich than traditional SMS. It's not surprising, therefore, that SMS is now on the decline and Internet-based messaging use is still soaring. But this is just the beginning for cross-platform messaging. And that's why Marcus says Messenger will be aiming to "put a smile on the faces of those people who matter the most in your life" as Facebook adds breadth and features to the product.

Messaging will undoubtedly be a huge focus for social platforms during 2016, and Facebook will likely lead the way.