Please ensure Javascript is enabled for purposes of website accessibility
Log In Help Join The Motley Fool
Free Article Join Over 1 Million Premium Members And Get More In-Depth Stock Guidance and Research
By Daniel B. Kline - Jan 12, 2016 at 7:59AM

One brand raked it in, while one transitioned for the future, and another stumbled at wholesale.

While Starbucks (SBUX -4.21%), Panera Bread (PNRA), and Krispy Kreme (NYSE: KKD) all have morning-heavy menus, the three chains went in different directions in 2015.

There's a story that goes deeper than coffee sales as to why Starbucks was a home run, Panera hit either a long single or hustled out a double, and Krispy Kreme most certainly struck out.

Starbucks has it going on
It's relatively easy to see why Starbucks had a good year. The company saw global comparable-store sales rise 7% driven by a 3% increase in traffic, it reported in its Q4 earnings release. The company also reported that consolidated net revenues were up 17% over fiscal 2014 to a record $19.2 billion.

"Starbucks' record Q4 financial results, highlighted by stunning comp store sales increases of 8% globally, 9% in the U.S. driven by a 4% increase in global traffic, demonstrate the strength and relevance of the Starbucks brand around the world," said CEO Howard Schultz.

It was a good year no matter how you look at it, and investors rewarded the company for its strong results.

That's not as strong as Starbucks' growth numbers, but it's in line with the company's full-year prediction of growth between 2 and 3.5% at company-owned stores. Panera is in the early stages of rolling out a new design concept, dubbed 2.0.

"Our strategic plan to generate increased shareholder value by making Panera a better competitive alternative with runways for expanded growth is working," said CEO Ron Shaich in the Q3 earnings release. "We are particularly pleased with these results in light of the slowing sales reported across the industry in October. Q3 represented our best performance in nine quarters." 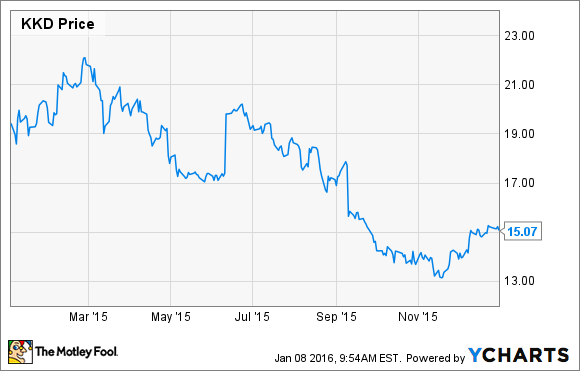 On the surface, Krispy Kreme looks like it has had a pretty decent year. Through the first three quarters the company reported that revenues increased 6.4% to $388.4 million from $365 million. In addition, systemwide domestic same-store sales rose 4.7%, including a 3.1% gain at company-owned stores, though sales at international franchise stores declined 2.7%.

But the company didn't meet its sales projections, something that was driven not by its stores, but by its failure in grocery stores. That led to a higher-than normal level of returns from the chain's wholesale partner CFO George Price Cooper said during the company's conference call with analysts, CNN Money reported.

It was a classic case of overreaching and growing beyond demand that investors punished. The stock's big drop happened after Q3 results were reported, specifically punishing the shares because of the problems in supermarkets and other retailers.

To remedy that issue, Krispy Kreme plans to return to its roots in 2016 and 2017, focusing on growing the company's store counts.

"We are on track to open over 130 net new Krispy Kreme shops around the world in fiscal 2016," said CEO Tony Thompson in the earnings release. "More importantly, we continue managing Krispy Kreme for the long term by focusing on the tremendous opportunities we see for our iconic brand. Our energies are centered on driving sales, profitability, and reducing investment costs at small retail shops, which will strengthen our domestic expansion model for both company and franchise development."