2015 wasn't a great year for IPOs, but these five performed especially poorly.

2015 wasn't a great year for IPOs. In fact, the performance of IPOs was generally pretty dismal compared to previous years.

To put things in perspective, consider that companies that hit the markets in 2014 are up by an average of 21%, while companies from the IPO class of 2013 are doing even better, up 40% on average. Meanwhile, the average 2015 IPO has averaged a total return of negative 5%.

There have been a few IPOs that have produced impressive returns, but others are trading for far less than their IPO price less than a year after going public.

Let's go over the five worst IPOs of 2015 based on their performance since going public, excluding the minnows with market capitalizations of less than $250 million. Here are the five whose share prices have lost the most since their IPO pricing.

1. Etsy (ETSY -2.78%): Down 74% from IPO price
Etsy is well-known for its online marketplace of handmade goods, but investors were spooked by the emergence of Amazon.com's "handmade" offering. Etsy is taking steps to adjust, but the market isn't convinced just yet.

Despite the lackluster performance, Etsy is still growing rapidly, with year-over year revenue growth of 37.9% in the third quarter. Further, the number of active sellers and buyers increased significantly, up 19.4% and 24.9%, respectively. It will be interesting to see how Etsy fared during the holiday season, as the company feels that its holiday marketing efforts in 2015 were its strongest to date.

2. WOWO Ltd. (NASDAQ: WOWO): Down 49% from IPO price
This Chinese e-commerce company, which specializes in entertainment and lifestyle services, picked an unfortunate time to go public, as Chinese Internet stocks had a pretty weak 2015 overall. Shareholders may also be unsure about WOWO's future, as revenue fell by 17% year over year and losses accelerated. In fact, for fiscal year 2014, the company's net loss was even more than its revenue.

3. Invitae (NVTA -9.13%): Down 58% from IPO price
Invitae specializes in genetic diagnostics for hereditary disorders, and it has missed earnings estimates in its first three quarters as a public company. The company's negative cash flow has been a turnoff to investors, and the stock seems extremely risky at this point.

However, there have been a few reasons for shareholders to smile. During the third quarter, Invitae's volume of billable genetic tests grew 360% from the previous year, and the cost of each test dropped by about 12%. For the full year, the company raised its guidance from 16,000-18,000 billable tests to 17,000-19,000. If the company can continue its rapid growth and keep cutting costs, then it may only be a matter of time before a profit is achieved.

4. Tallgrass Energy GP (TGE): Down 48.2% from IPO price
2015 was an unfortunate year for the energy industry all around. Tallgrass Energy is a limited partnership that owns and manages oil and gas assets, designed to be a pure-play general partnership version of Tallgrass Energy Partners (NYSE: TEP). Much of the decline in price can be attributed to low commodity prices, and an oil price rebound could give shares a much-needed boost. In the meantime, shareholders are paid a 3.61% dividend yield, which management expects to increase by 20% by 2017.

5. TerraForm Global (NASDAQ: GLBL): Down 70% from IPO price
TerraForm is a yieldco that operates clean power generation assets in emerging markets such as China, Brazil, and India. Yieldcos are companies created by parent companies (in this case SunEdison), designed to hold assets and generate predictable cash flows, and therefore produce a reliable dividend stream for shareholders. In 2015, Yieldcos had a rough year in general; low oil and gas prices tend to make solar and wind assets less attractive to investors, as does the prospect of rising interest rates. Additionally, since TerraForm's assets are all in emerging markets, this further increases the risk involved. However, the current 12.2% dividend yield may persuade some long-term investors to take the chance while prices are so low. 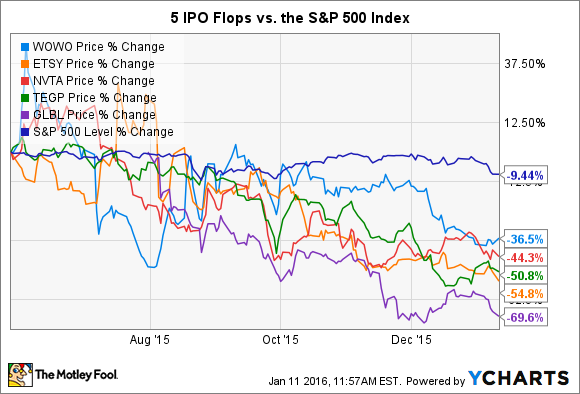 The bottom line on IPOs
One thing is for certain: IPO investing is volatile, and while some IPOs double in their first year, many others get hammered. These are some extreme examples of what can go wrong, but most IPOs are speculative investments and should be treated as such when you're deciding whether to invest or not.