The error of ignoring taxes.

Most of what's important in investing is counterintuitive.

Imagine you meet and genie who can grant you one of two wishes:

Which one would you pick?

The obvious answer is the trading strategy. But it's wrong for most investors. The correct answer is the buy-and-hold strategy. Despite earning a far lower return it finishes the 20-year period with substantially more money.

This isn't a trick question. The explanation is shockingly obvious: Taxes.

Capital gains earned in stocks held for less than one year are taxed as ordinary income – as high as 39.6% just for federal taxes. But profits on a stock held for more than a year are generally taxed at a lower rate -- no higher than 23.8%, depending on your income.

Not only are long-term returns taxed at a lower rate, but because gains are only taxed after a sale, a deferred tax bill raises your account balance and increases the power of compounding. The effect is so powerful that a 14%-annual-return buy-and-hold strategy easily beats a strategy that earns 20% but is taxed each year. 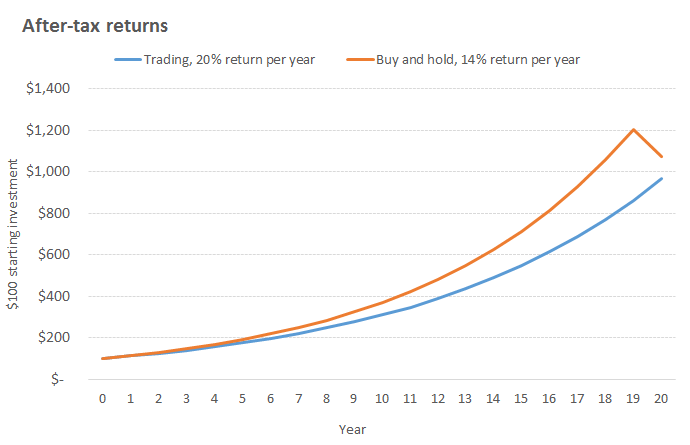 You've probably heard about the percentage of mutual funds that don't beat an index fund. It's astounding – about 88% of actively managed stock funds have trailed an index fund over the last decade, according to Vanguard.

As lousy as those numbers are, they're worse when you factor in taxes. Since most active funds are constantly buying and selling stocks, tax bills can be passed onto their investors each year. And investors themselves buy and sell shares in mutual funds, generating capital gains if the fund has done well. Jeffrey Ptak, an analyst at Morningstar, recently crunched the numbers and showed that, after taxes are taken into consideration, about 96% of actively managed funds underperform a passive strategy over time.

Most investors find outperforming the market hard enough. But outperforming when Uncle Sam takes his cut each year is nearly impossible. The evidence shows that virtually no one can do it, since the excess returns necessary to beat a buy-and-hold strategy are so large. But how often do you hear that? The majority of investment brainpower is devoted to the highest investment returns earned as quickly as possible, period. That's where the money is (and the fees are). We treat taxes like a sideshow, but they alter real investment returns more than things like fees and volatility, which we obsess over.

There's to add to this topic: Tax-deferred accounts like an IRA. Different income tax rates depending on your income. Strategically taking a tax loss as a write off. The near-certain chance that tax laws and tax rates will change over the next 20 years. And a rational person might prefer to the inferior trading strategy because it provides annual liquidity to buy stuff, rather than waiting 20 years for a payoff.

But Warren Buffett once said the goal of all investors should be to increase their after-inflation, after-tax wealth over time. It seems like such an obvious statement, but how did you answer the genie question above? The power of delaying taxes is more powerful than many investors think.