With the announcement of HealthBox at CES 2016, Under Armour is looking to streamline fitness tracking.

Just in time to help you reach your 2016 fitness goals, Under Armour (UAA -9.77%) and HTC have partnered to bring you HealthBox, a $400 trio of products that will measure, monitor, and manage a variety of health and fitness metrics.

At CES 2016, Under Armour revealed a new band, heart-rate monitor, and smart scale. The apparel and footwear maker also announced a new smart shoe and a pair of wireless headphones. All of these products will be tied to an updated UA Record app, which is available on iPhone and Android devices.

HealthBox should provide a meaningful boost to Under Armour's connected fitness business, which during the first nine months of 2015 recorded $36 million in revenue. Despite growing over 160% from 2014, connected fitness accounts for just 1.3% of the top line.

With the introduction of its new connected fitness portfolio, Under Armour looks to grow its digital business. Let's take a look at each products in further detail: 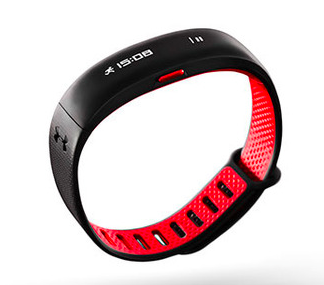 UA Band: The UA Band has a five-day battery life and measures sleep, resting heart rate, and activity. None of these features is unique, as competing products such as the Charge HR from Fitbit essentially do the same thing. However, a distinctive feature of the Under Armour offering is that you will be able to shower with your wristband -- it's water resistant. It can also measure workout intensity if paired with the UA Heart Rate. The design is simple and sleek, as if the Fitbit and discontinued Nike Fuelband had a baby. The UA Band will retail for $180, about $30 more than than the Charge HR.

UA Heart Rate: A possible replacement for its disappointing Under Armour39 chest strap, this tracker will probably be a niche product for the serious athlete. Heart-rate monitors have given way to wrist-based trackers, but for fitness fanatics who want the most accurate tracking, the UA Heart Rate will be appealing. The water-resistant UA Heart Rate will retail for $80 and features a 365-hour battery life.

UA Scale: If there was ever a device that made a scale cool, this it it. With the smart scale, up to eight users can set their weight goal, track their progress, measure body-fat percentages, and sync directly to the UA Record app. The UA Scale may actually make you want to step onto the scale, for just $180.

UA SpeedForm Gemini 2 Record: The first smart shoe from Under Armour, the Gemini 2 can track and store the time and date you ran, along with duration, distance, and splits. At a time when it seems like you can't go for a run without your watch and phone, athletes can take comfort in knowing that with Under Armour's smart shoe, they can run device-free. The Gemini 2 will be available at the end of February and retails for $150.

UA Headphones: In partnership with JBL and Harman, Under Armour unveiled two wireless headphones. Both have Bluetooth capabilities and are guaranteed to never fall out (given my frustration with headphones, that sounds like a challenge). The more expensive pair can also monitor your heart rate. The headphones will retail for $180 and $250, respectively.

On its own, each gadget has distinct features that make them attractive. However, Under Armour isn't selling anything revolutionary with its activity trackers. In fact, the UA Band will be a fairly late entry in a race that includes Fitbit, Jawbone, Mio, Garmin, and even Microsoft. A successful rollout for Under Armour won't depend on the quality of its hardware but on how seamlessly that hardware can sync with its software.

By bundling the wristband, heart-rate monitor, and scale into HealthBox, Under Armour is aiming to create an ecosystem of fitness products where athletes can measure, track, and monitor their health with ease. The UA Record app will aggregate and report data from all of Under Armour's digital devices with minimal syncing and data entry from users. It may not be first to the fitness-tracking market, but if Under Armour can become a one-stop shop for fitness buffs, it may become the leader.

Palbir Nijjar owns shares of Nike. The Motley Fool owns shares of and recommends Nike and Under Armour. Try any of our Foolish newsletter services free for 30 days. We Fools may not all hold the same opinions, but we all believe that considering a diverse range of insights makes us better investors. The Motley Fool has a disclosure policy.