It's almost assured to happen. The question is, how much?

Will Phillips 66 give more of this back to investors this year? Probably so.

Since going public as a spinoff of ConocoPhillips (COP 3.25%) in 2012, midstream giant Phillips 66 (PSX -1.07%) has increased its dividend by nearly threefold, but at some point, the music has to stop, right? Nobody in the energy business is making money at these levels, right?

Not so fast. Phillips 66 isn't your typical "big oil" company but instead operates in the segments of the industry that not only shield it from commodity prices, but actually benefit some of its operations. Factor in an incredibly conservative management team when it comes to capital allocation, and the company's dividend is safe and likely going up again in 2016. Let's take a closer look at why.

Build for any market condition
Phillips 66 does sell gasoline, diesel, jet fuel, motor oil, and other products that it manufactures in its refining operation, so it will feel a revenue pinch from the decline in commodity prices. But since it doesn't actually drill for oil like its integrated major peers ExxonMobil (XOM 2.75%), or its former parent ConocoPhillips, it isn't losing money in its drilling operations.

For context, ExxonMobil reported $4.2 billion net income in its third quarter; a tidy sum, but half what it earned in the year-ago quarter. You can chalk up all -- and them some -- of the decline to its upstream (read: exploration & production) segment, where profits fell by $5 billion. ExxonMobil actually lost money in its U.S. upstream operations, after earning $1.3 billion in Q3 of 2014.

For even more context, ConocoPhillips, which after the spinoff is wholly an oil and gas producer, made a $6.9 billion net profit in 2014, while the company has reported a $978 million loss through only three-quarters of 2015.

In other words, the current commodity price environment is pretty hard if you're drilling for and selling oil. But since Phillips 66 buys its oil on the market, the refining operation benefits from lower input costs. At the same time, CPChem, the company's petrochemicals joint venture  with Chevron, is also getting the benefit of cheaper natural gas and natural gas liquids that it buys to manufacture its products with.

This is why Phillips 66 has reported earnings so far in 2015 that are roughly inline with the year before, while its peers that drill for oil and gas are getting squeezed.

One thing that could pinch profits, but isn't a threat to the dividend
If there's any one risk for Phillips 66 going forward, it's the shrinking of the "Brent spread." The prices of gasoline, diesel, jet fuel, and other products of crude oil are typically tied to Brent crude prices, while over the past several years, West Texas Intermediate and other crudes that Phillips 66 can refine have traded at a significant discount to Brent: 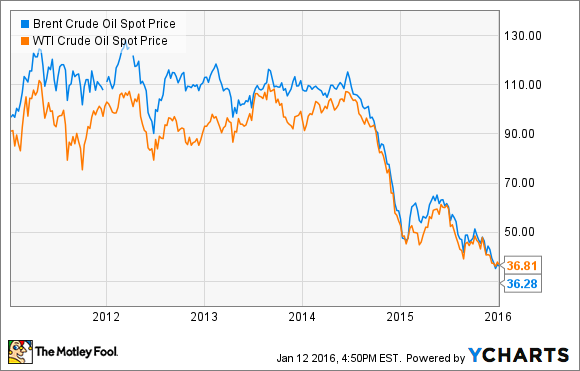 This has been a boon for refiners such as Phillips 66 with advanced refineries that can handle nearly any crude, since the lower the company can get its oil costs, the wider its margins will be on the fuel and other oil products it sells. But as you can see in the preceding chart, the Brent spread has narrowed significantly and in some cases is gone.

It's unlikely that the company gets as much of a benefit from this spread going forward, but there's a big difference between getting a benefit and needing that benefit to make a profit. The bottom line is that while this could affect the company's refining profits, it's definitely not going to come close to drying them up.

At the same time, falling oil prices are helping overseas petrochem manufacturers to be more competitive as well, with falling naphtha prices helping those manufacturers be more price competitive. But similar to the impact of how the narrowing of the Brent spread could affect margins, this won't cause CPChem to lose money.

Up is likely; double-digit bump isn't out of the question
Since going public, Phillips 66 management has done more than just increase the dividend: 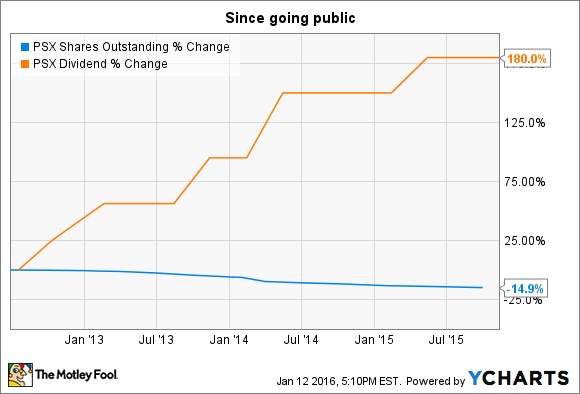 The company has also repurchased billions of dollars in stock, increasing shareholder equity, and also lowering the impact of future dividend increases. Think about it this way: If the company had kept its dividend steady since going public, it would be paying out about 15% less in dividends today simply because of the reduced share count.

At the end of last quarter, the company still had $3 billion earmarked for share repurchases, and with the sharp price drop since then, it's likely that the company was aggressive in buying back shares over the past month or two.

Factor that in with the already very low percentage of earnings that the company is paying in dividends today, and another double-digit increase in 2016 isn't out of the question: 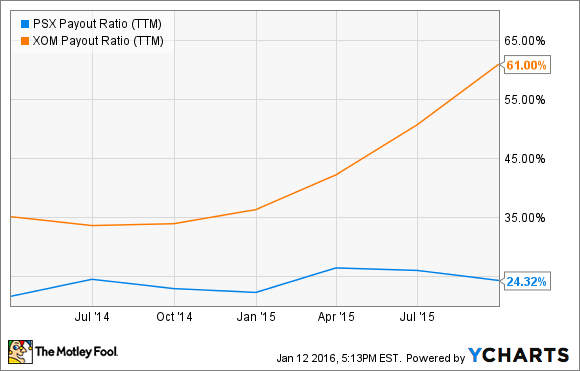