Up or down, these three stocks are about to move. Here's what you need to know.

Although Foolish investors take the long view, the biotechnology industry is marked by seismic events that can abruptly alter stock prices.

Soon, Sarepta Therapeutics (SRPT -0.24%) will face a make-or-break moment in front of an FDA advisory committee that will discuss the approvability of its lead candidate. The FDA isn't required to follow independent committee recommendations, but it usually does. The next several weeks will also be tense for Vertex Pharmaceuticals (VRTX 0.81%) shareholders, as the company awaits a regulatory decision expected Feb. 6 or possibly sooner. Also in February, Flexion Therapeutics (FLXN) is expected to announce phase 3 results for a drug that missed the mark last year.

Muscular dystrophy
Hands down, the industry's most watched event of the new year will be Sarepta Therapeutics' Jan. 22 advisory committee date. Its lead candidate, eteplirsen for the treatment of Duchenne muscular dystrophy, will be the second drug in this space to undergo such a meeting, and the first was a disaster.

Although there wasn't a yes-or-no vote to recommend approval of Biomarin's drisapersen, available trial data didn't persuade the panel to overlook the drug's inability to significantly improve patients' performance in the six-minute walk test, a commonly accepted efficacy endpoint.

In contrast to Biomarin's candidate, Sarepta's eteplirsen significantly improved six-minute walking distance performance after three years on treatment, but not without some important caveats. With just 12 patients, improved performance could be due to one or two outliers in the treated population. Also diminishing the impact of eteplirsen's efficacy results is the use of historical control data instead of the generally accepted double-blind placebo controlled method.

With etiplersin's efficacy data, and a superior safety profile, Sarepta's advisory committee meeting should be more upbeat than Biomarin's. However, I think the FDA will eventually send both companies requests for additional information before approval decisions are made.

An eventual approval isn't the only uncertainty surrounding Sarepta and eteplirsen. Duchenne muscular dystrophy occurs in about one of every 3,500 to 5,000 male births, but because of the deadly nature of the disease, the number of existing patients is unknown. Compounding the issue is that eteplirsen would be able to treat only about 13% of an already small population.  Despite a small but unknown number of treatable patients, peak sales estimates for eteplirsen range from $500 million to $1.5 billion annually. Without any marketed products generating revenue for Sarepta, even reaching the low end would lead to tremendous gains.

An important expansion
While Sarepta shareholders fret over an advisory committee meeting, Vertex Pharmaceuticals is anticipating approval of a label expansion for its cystic fibrosis (CF) drug Kalydeco. This is the first approved therapy to treat the underlying cause of CF, a life-threatening disease caused by any one of more than 2,000 known mutations in the CFTR gene.

Since its approval nearly four years ago, Vertex has expanded the number of mutations Kalydeco is approved to treat from one to nine, and when the company last reported, the drug was selling at an annual run rate of $664 million. Currently the FDA is considering an application that would expand its usage to patients with an additional 23 mutations. According to Vertex, these mutations represent about 1,500 patients in the U.S. With a price tag of around $300,000 per year, this label expansion alone has the potential to raise the company's top line by more than 30%.

Vertex expects a decision from the FDA by Feb. 6, but an approval is far from guaranteed. Kalydeco showed promise during pre-clinical testing for all 23 mutations included in the application, but clinical data is available for just eight.

Fortunately for Vertex shareholders, the company has something Sarepta and Flexion don't -- growing product sales. While the company hasn't reached profitability yet, it's getting there fast. An approval of Vertex's pending application for expansion of Kalydeco would help it get there faster, but failure to convince the FDA this time around would be more of a speed bump than a death blow.

Knee-jerk reactions
Last September, Flexion Therapeutics announced the failure of its lead candidate to reach its primary endpoint in a phase 2b trial. The market reacted swiftly, hammering the stock. 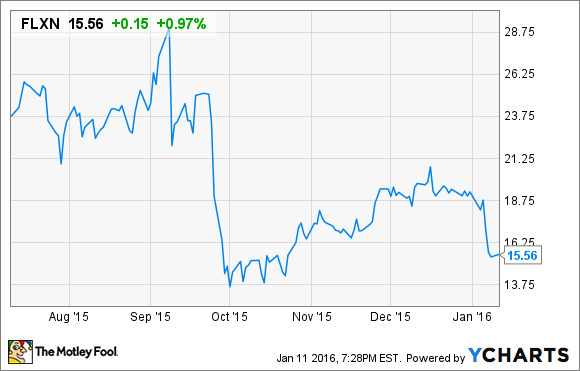 Zilretta, formerly FX006, is an injectable form of the topical, over-the-counter steroid triamcinolone acetonide, or TCA. This isn't the first injectable form of TCA, but Zilretta is intended to provide longer lasting pain relief for osteoarthritic knee pain than existing options.

In the phase 2b trial the higher of two doses tested provided significant relief over a saline placebo, in weeks 1 through 11, and again in week 13, but not during week 12, the trial's primary endpoint. This does not bode well for the phase 3 trial which is measuring Zilretta against saline and immediate release TCA, also at 12 weeks.

Given the lack of effective, non-opioid pain relief for osteoarthritis, the drug's potential market is enormous if it is approved and used. In 2014 over 3.5 million patients received steroid injections in their knees, and the procedure is getting more popular every year. A longer lasting version that reduces visits to healthcare providers could reach blockbuster status. We'll know if this is a possibility sometime in February when the company is expected to announce phase 3 results.

If Zilretta fails to show significant pain relief over existing steroid injections, investors could face heavy losses. When the company last reported it had enough cash and equivalents to take it into 2017, but without any revenue to speak of, and just one other drug in clinical trials, its shareholders have plenty of reasons to be nervous.

Cory Renauer has no position in any stocks mentioned. The Motley Fool recommends BioMarin Pharmaceutical and Vertex Pharmaceuticals. Try any of our Foolish newsletter services free for 30 days. We Fools may not all hold the same opinions, but we all believe that considering a diverse range of insights makes us better investors. The Motley Fool has a disclosure policy.