Led by one of the pioneers of the modern day REIT industry, Equity CommonWealth looks primed for a comeback.

Before 2013, Equity CommonWealth (EQC 0.50%) had an unexciting history. But that all changed when the management team at this real estate investment trust was accused of aggressively growing assets only to line their pockets with additional management fees. Long story short, there were activist investors, angry letters, and a voting out of the company's entire board of trustees in March 2014.

Today, there's good news: First, Equity CommonWealth is in full-blown turnaround mode, and that means you'll get a nice discount on the stock. Second, the new management team has helped solidify the balance sheet. And third, that new management team is led by billionaire Sam Zell, chairman of several of the most enviable real estate companies.

The discount
During the company's third quarter call in 2014, Zell admitted that "we took over a company that was not created with any logic behind it." He added that the company is focused on selling assets -- and that remains true today. In short, Equity CommonWealth has a long way to go, and there's no guarantee that it will blossom into a good business. That inherent risk warrants a discount.

Consider the price-to-book ratio, which tells us what the company is worth, per share, if it liquidated its assets and paid off debt. Here's how things looked as of Sept. 30, with two of its office-property peers for points of comparison:

Equity CommonWealth is trading at a 7% discount to its book value, and an even greater discount to its peers. That's enough to consider the stock cheap, but let's take it a step further.

Highwoods Properties is a good direct comparison to Equity CommonWealth. Both companies have a $4 billion market cap, and their office properties are located in slightly lower-profile cities such as Philadelphia, Atlanta, and Denver.

Therefore, if Equity CommonWealth's book value per share holds steady, and its valuation increased to 1.5 times book value, the same as Highwoods Properties, then its stock price would increase 61%.

Moreover, for the company to warrant such a valuation, investors would probably need to see improvements in earnings, book value, and portfolio quality, and that could push the stock price up even higher. That's a serious potential upside -- but keep in mind that such a discount could also be a warning sign that the company is in dire straits.

Is the business stable?
One of the best metrics to judge stability is debt-to-EBITDA, which uses a key cash flow measure, EBITDA -- or earnings before interest, taxes, depreciation, and amortization -- and gives insight into how many years it would take the company to pay down its debt, with earnings, if the situation remained constant. 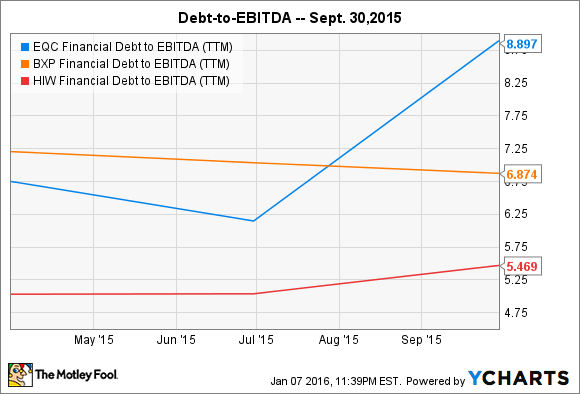 Equity CommonWealth looks to be in pretty rough shape. In general, a ratio close to 9 is miserable, and the company's peers don't make it look any better.

However, Equity CommonWealth has had a fire sale on its less-desirable assets, including a number of smaller or poorly located properties. In fact, since the second quarter of 2014, the company has sold off a third of its real estate assets. This activity has left the company with $1.6 billion in cash, compared with just $2 billion in total liabilities. That cushion is more than enough to feel comfortable about Equity CommonWealth's stability.

The new management team
To this point, you know that Equity CommonWealth is cheap and that the company isn't going bankrupt -- which isn't a compelling reason to buy anything. But let's consider the role of a management team that has proved it can build industry-leading companies.

Of the three, Equity Office is particularly important -- not only because Equity CommonWealth also focuses on office properties, but also because the company's chief investment officer was David Helfand, who is now Equity CommonWealth's CEO.

Ultimately, Zell and Helfand have put Equity CommonWealth on firm financial footing. Now the company has $1.6 billion in cash -- which is enough to grow assets by 40% -- and two executives that have a proven track record of building companies. There are no sure things in investing, but I think Equity CommonWealth is a good bet to become a successful turnaround story. I'll be adding the stock to my Motley Fool CAPS account -- you can follow how it does here.

Dave Koppenheffer has no position in any stocks mentioned. The Motley Fool recommends Equity Commonwealth. Try any of our Foolish newsletter services free for 30 days. We Fools may not all hold the same opinions, but we all believe that considering a diverse range of insights makes us better investors. The Motley Fool has a disclosure policy.