These timely picks could offer a great start to investing in the new year.

After the broader market's painful pullback so early this year, skittish investors might be tempted to run for the hills. But for those willing to resist the urge and maintain their composure, this also means opportunity.

To capitalize on that opportunity, we asked seven of our contributors for their top stocks to buy in the month of January and what could make them buys. Read on to learn which companies they chose:

Evan Niu, CFA (Netflix): Even as Netflix (NFLX -1.76%) was one of the best-performing stocks of 2015, putting up an enviable 134% gain, the online video streamer has some exciting opportunities in the year ahead. But there are two opportunities in particular that are especially promising.

Just this month, at the Consumer Electronics Show in Las Vegas, Netflix announced a massive global expansion that brought its total number of markets to over 190. The company added 130 new countries simultaneously, dramatically expanding its addressable markets in the blink of an eye. Even as international markets are less profitable early on due to outsized growth investments, the long-term potential is incredible.

Netflix also intends to nearly double the number of original shows that it launches in 2016. At a recent investment conference, chief content officer Ted Sarandos said that the company will reach 31 original scripted shows throughout 2016, up from 16 in 2015. That's in addition to a plethora of feature films, shows for kids, documentaries, and stand-up comedy specials. Original content is a huge competitive advantage for Netflix, a strong value proposition, and one of the most efficient content investments that Netflix can make.

Let's see if Netflix can crush the market again in 2016.

Alas, both Ruger and Smith & Wesson have since given up their gains as the broader market pulled back. And though Sturm, Ruger has remained silent on the guidance front, I won't be the least bit surprised if its quarterly report next month reflects the same strength as indicated by the broad-reaching NICS data referenced by its competitor. Should that be the case, Ruger stock could enjoy a nice little pop to make up for its recent slide.

And while Smith & Wesson doesn't offer a dividend, Ruger consistently aims to pay a quarterly dividend of roughly 40% of net income to shareholders (currently yielding 2.5% annually). This shields Ruger from being inadvertently burdened should demand for its products wane temporarily, while at the same time ensuring long-term investors can be rewarded for their patience. On top of that, Ruger has a history of prudently implementing share buybacks to increase investors' slice of the pie, has a clean balance sheet with just over $60 million in cash and no debt, and generates healthy cash from operations ($94.9 million for the first nine months of this year). Over the long run, that's why I think Sturm, Ruger has what it takes to handsomely reward patient investors who buy today.

Matt DiLallo (EOG Resources): EOG Resources (EOG 0.44%) is one of the smartest-run oil companies in America. Its management team organically leased up core positions in premier shale plays before anyone else, which enabled it to control some of the lowest-cost oil positions in the country. By getting in early, avoiding flashy acquisitions, and then not investing beyond its means, EOG Resources now possesses one of the strongest balance sheets in the sector. This has given the company unparalleled flexibility, which comes in very handy during these tough times.

For example, when most of its rivals were still chasing production growth last year because they needed the cash flow, EOG Resources slammed on the brakes and kept back incremental production, waiting for conditions to improve. It also drilled but didn't complete hundreds of oil wells, choosing to wait until prices improved before bringing those wells on line. These have turned out to be some of the smartest moves made during the downturn. The company has preserved value while many of its peers wasted it by growing production into an already oversupplied market. Meanwhile, EOG Resources stands ready to deliver robust growth in both production and cash flow when conditions improve.

While it's anyone's guess when conditions will improve, EOG Resources' strong balance sheet virtually guarantees that it will emerge on the other side. That combination of stability through the storm and upside potential makes it a great stock to consider buying this January.

Andres Cardenal (Wal-Mart): Wal-Mart (WMT 0.04%) is a contrarian pick right now. Shares of the retail giant are down by nearly 28% in the last year. This is a big move from a big and stable corporation such as Wal-Mart. The retail business is savagely competitive, and increased investments in people and technology will hurt profit margins in the coming year. On the other hand, investors are overreacting to Wal-Mart's problems.

Big industry trends such as the e-commerce revolution represent an important challenge for Wal-Mart, but the company has the strategic and financial resources to successfully adapt. In fact, in October it announced increased investments in people and technology to drive sales growth. This will hurt operating income by an estimated $1.5 billion during fiscal year 2017, but management is doing the right thing by putting long-term growth above short-term profits. The company is the biggest retailer on the planet, owning more than 11,500 stores in 28 countries, and it makes nearly $484 billion in annual revenue. This massive scale is a crucial advantage in discount retail, as it is able to negotiate low prices and flexible payment conditions with suppliers.

Daniel Miller (Chipotle): Yes, shares of Chipotle Mexican Grill (CMG -0.22%) have been pummeled in recent months as the company continues to deal with the aftermath of outbreaks of norovirus and E. coli in multiple states. 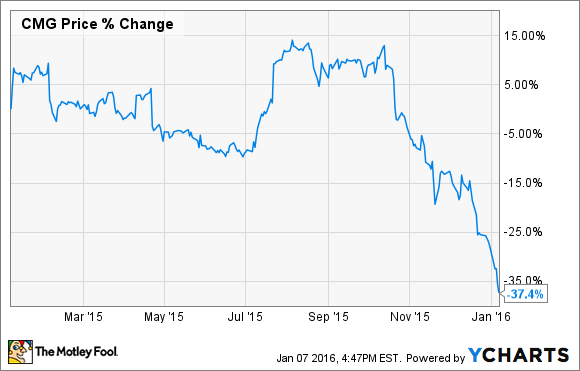 Chipotle recently disclosed that the outbreaks helped fuel a 14.6% comparable-store sales decline during the fourth quarter. Despite the plunge in same-store sales and the possibility that sales will remain depressed throughout much of 2016, this shouldn't change investors' perspective of the company if they believe the brand isn't permanently damaged -- and I don't believe it is.

History is full of many examples of worse situations, and the companies have recovered. Consider General Motors in 2014, when its ignition switch recall accounted for more than 30 million vehicles and was responsible for many lives lost. I daresay that's a much more significant scenario than the one Chipotle faces currently, and GM is here today generating near-record profits hardly a year later.

Chipotle has created a very powerful brand image revolving around a consumer shift toward naturally raised protein and organic foods. That has in turn created a critical source of pricing power as well as differentiation from other fast-casual restaurants. Those advantages it's enjoyed shouldn't erode over the long term due to these E. coli outbreaks or investigations.

Looking past the near-term discount due to the current challenges, investors should realize that despite the company's shares posting insane returns since its IPO, the company still has the potential to roughly double its store count before nearing saturation. Even further, Chipotle has other concepts, such as Pizzeria Locale and ShopHouse, which only add to its long-term growth potential.

Just like investors in the automotive industry realize mistakes and recalls will happen and automakers will likely rebound, investors in Chipotle and the fast-casual restaurant industry should realize these types of challenges will pop up. If you believe Chipotle's brand isn't permanently damaged, the current share price offers a great discount for the long term.

George Budwell (Heron Therapeutics): The stock that has my attention this month is Heron Therapeutics (HRTX -3.26%), which is expected to hear from the Food and Drug Administration about its regulatory application for the chemotherapy-induced nausea and vomiting, or CINV, drug Sustol, on or before Jan. 17.

If this drug is approved -- and there's a good chance it will be based on its late-stage trial results -- some analysts covering this stock think the company's net loss per share could shrink by as much as 50% in 2016 from a year ago, according to S&P Capital IQ. While this estimate is certainly on the aggressive end of the spectrum, there's good reason to believe it's achievable.

The basic issue is that there isn't a single drug on the market right now that's broadly effective for CINV, especially in terms of alleviating nausea. Based on Sustol's latest clinical-trial result, this drug looks like it could turn out to be a major improvement in the current standard of care for CINV, potentially setting it up for a rapid adoption by the medical community. That's why I'm considering adding this stock to my portfolio this month if Sustol is approved by the FDA.

Todd Campbell (Merck): If the FDA approves Merck & Co.'s (MRK 0.53%) new hepatitis C therapy on its expected Jan. 28 decision date, then Merck & Co. could take away billions in hepatitis C drug sales from competitors Gilead Sciences (GILD 0.01%) and AbbVie (ABBV -0.64%), and that makes it one of my top stocks to buy this month.

GILD is a Goliath in HCV treatment, with annualized sales in the indication of roughly $20 billion in Q3, and Abbvie's Viekira Pak has carved out a niche as a lower-cost therapy approved on some drug formularies. Sales of Viekira Pak exited the third quarter at a $1.9 billion annualized pace.

Most of Merck & Co.'s success will likely come at the expense of Viekira Pak, which arguably doesn't work as well and is less safe than Merck & Co.'s treatment. GILD's Harvoni has a shorter eight-week treatment period for 45% of genotype 1 patients, so it's more insulated against Merck & Co.'s threat, which is dosed over 12 weeks.

Nevertheless, it won't take a lot of script volume to turn Merck & Co.'s therapy into a billion-dollar blockbuster, especially if the company prices the drug competitively. And for that reason industry watchers expect GILD's EPS to stall this year while Merck & Co's EPS climbs 5%.