What: Shares of companies in both the Plains All American (PAA 0.36%) and Energy Transfer Equity (ET 2.73%) families declined 10% or more during trading today, and most declined by an amount close to that. Plains mostly dropped on a private-equity deal and a couple of analyst downgrades, while continued unease about the Energy Transfer/Williams Companies (WMB 0.58%) acquisition set all of the companies' holdings reeling today. Here's a quick rundown of the declines today.

So what: The market was not kind in general to energy stocks today. The news of oil's dip below $30 a barrel is spooking just about everyone, and the entire sector was down more than 2%.

The reason Plains suffered so much was that it recently announced a deal where it was able to meet its 2016 funding needs by issuing $1.5 billion in preferred convertible units. Those units were bought by a gaggle of different hedge funds, and it allowed Plains All American Pipeline to continue its plans to pay its distribution without a cut. It appears, though, that analysts at both Stifel and J.P. Morgan were less impressed with the news, as they both downgraded Plains GP holdings today from "buy/overweight" to "hold/neutral." I guess the absolute trouncing of Plains' stock over the past 18 months wasn't enough of an indicator that Plains wasn't doing well for these guys. 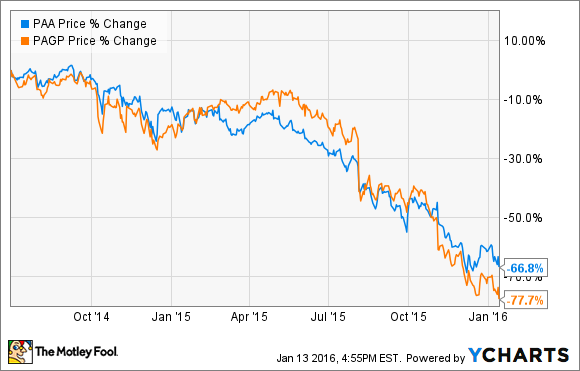 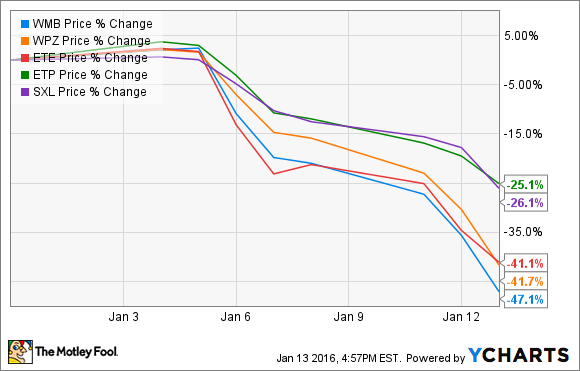 With shares trading this low and the yields for each of these companies getting pushed so high, it's also making raising capital through the equity market prohibitively expensive. Some analysts are now saying that either this deal doesn't get done, Williams is forced to cut its dividend, or possibly both.

Now what: The seemingly insatiable demand for new energy infrastructure sent Plains, Williams, and Energy Transfer on a binge of construction that involved taking on large amounts of debt while promising investors enormous payouts that barely left any in the coffers to pay for that growth. Now that demand for all that pipe isn't as robust, the argument that a company can "grow into its spending" is looking more and more like a disaster.

Williams' credit rating downgrade is acting like cement shoes for any company that is tangentially associated with Williams through its Energy Transfer deal, and Plains' decision to run into the arms of private equity instead of practicing some more prudent capital management will likely come back to bite it in the future.

In both cases, all of this price movement is begging for management at these companies to make some sort of move. Until that happens, investors should steer clear of these stocks