So what: "No reason" might be a bit misleading. All three companies make drugs, and 2016 has not been a good year to be a biotech company (yes, less than two weeks into the year). The iShares Nasdaq Biotechnology ETF (NASDAQ:IBB) is off more than 14% this year, including a 5.4% drop today.

It's ugly out there, Fools. 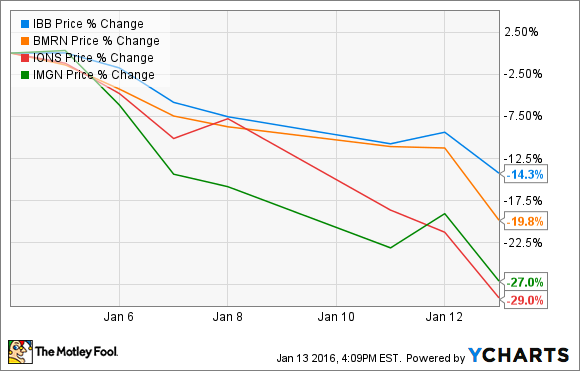 Now what: There's really no telling when the bloodbath is going to end, but the good news is that there's no reason to believe the companies are truly worth less now than they were yesterday. BioMarin Pharmaceuticals, Ionis Pharmaceuticals, and ImmunoGen still have the same drugs in their pipeline; in Ionis' case, there are 38 drugs! If those drugs pass their phase 3 trials and get approved, the value of the companies will increase. In BioMarin Pharmaceuticals' case it even has drugs on the market that could drive the value higher with increasing sales.

So why are investors selling? Most likely it's just sector rotation. Investors' risk tolerance changes over time. When they're fearful, they'll sell assets like biotechs that are perceived as more risky.

And you know what Warren Buffett says about times when people are fearful.