The iPhone maker is leaving its mark on one of the fastest-growing mobile device markets around.

Traditional smartphones -- generally considered devices with a screen size under five inches -- continue to dominate the market, and Apple (AAPL -0.34%) is reaping the rewards. As of November 2015, Apple commanded a whopping 43.1% of the U.S. smartphone market, and even more impressively, over 90% of industry profits. As shareholders are well aware, however, this market dominance hasn't prevented Apple stock from feeling some pressure.

Apple shares are down over 5% year-to-date, and that's following what many investors would consider a mixed 2015. Worse still, the aforementioned 43.1% market share that Apple holds is actually down 1% compared to August 2015 data. But if the holiday season is any indication, Apple's saving grace could prove to be its iPhone 6s Plus, thanks to its 5.5-inch screen. 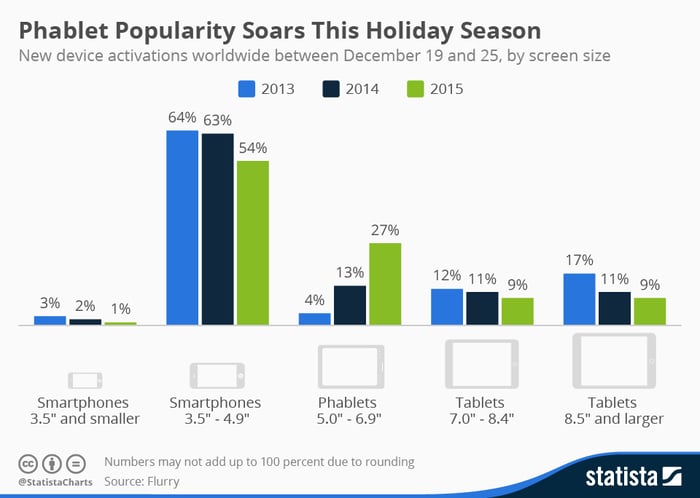 Just the facts
Phablets with their 5-inch or larger screen size were initially met with some scorn when Samsung (NASDAQOTH: SSNLF) first introduced its oversized Galaxy Note about four years ago. The hybrid device that landed somewhere between a smartphone and a tablet didn't sit well with industry pundits, though consumers didn't seem to share their negativity, quickly snapping up over 10 million of Samsung's new "phablets". Turns out, that was just the tip of the iceberg.

According to data from Flurry Analytics, phablets had a great holiday season led by the iPhone 6s Plus. Even as the number of "old school" smartphone and tablet activations declined on a percentage basis between Dec. 19 and Christmas Day compared to the 2014 holiday season, phablet sales skyrocketed.

As per Flurry Analytics, 54% of consumers activated their shiny new smartphones over the holidays: an impressive figure, to be sure. However, that's down from 63% in 2014 and 64% the prior year. The same trend applied to tablets as well, with a combined 18% of all new activations coming from tablets -- both large and small -- which Flurry categorizes as either above or below an 8.5-inch screen size.

The only device to buck the downward trends were phablets. In fact, the number of phablet activations didn't just grow compared to 2014, it exploded. A full 27% of all mobile device activations over the holidays were phablets, more than twice that of 2014, and nearly seven times as many than just two years ago. And with 49% of all new mobile devices coming from Apple, it's clear that the iPhone 6s Plus played a critical role in the success of this category.

Paying it forward
Naturally, estimates vary, but the jump in phablet sales this past holiday season is expected to continue. One estimate suggests as many as 146 million phablets will be sold this year, up from just 60 million in 2013, and it's not difficult to see why. In the last couple of years, smartphones have become a great deal more than a means to call home.

Consumers are surfing the web, streaming video, and even playing games on their smartphones more than ever before, blurring the line between smartphones and tablets. This bodes well for Apple, Samsung, and all the other phablet manufacturers of the world -- and the timing couldn't be better.

Industry insiders expect there will be over two billion active smartphones worldwide by the end of this year, up from fewer than 1.6 billion in 2014. The problem for folks like Apple and Samsung, among others, is the rate of smartphone sales growth is easing, and that same trend is expected to continue. Let's face it: There are only so many connected people on the planet and smartphones are approaching critical mass.

But the smartphone market saturation is also an opportunity for a different form factor, particularly one that offers consumers an alternative to their existing smartphone, and it appears phablets are beginning to do just that.

Apple shareholders have a host of revenue-generating opportunities to hang their respective hats on, including Pay, Watch, and even a rumored smart car, and it will continue to garner the vast majority of its profits from the sale of "traditional" smartphones. But don't discount the popularity of the 6s Plus, because consumers certainly aren't.

Tim Brugger has no position in any stocks mentioned. The Motley Fool owns shares of and recommends Apple. We Fools may not all hold the same opinions, but we all believe that considering a diverse range of insights makes us better investors. The Motley Fool has a disclosure policy.