Please ensure Javascript is enabled for purposes of website accessibility
Log In Help Join The Motley Fool
Free Article Join Over 1 Million Premium Members And Get More In-Depth Stock Guidance and Research
By Brian Feroldi – Jan 14, 2016 at 8:04AM

It was an awful year for the small-cap biopharma, but things could be looking up in 2016.

What: 2015 was a dreadful year for Keryx Biopharmaceuticals (KERX), a biopharmaceutical company focused on developing treatments for renal diseases. Shares lost more than 64% of their value during the year, according to data from S&P Capital IQ. 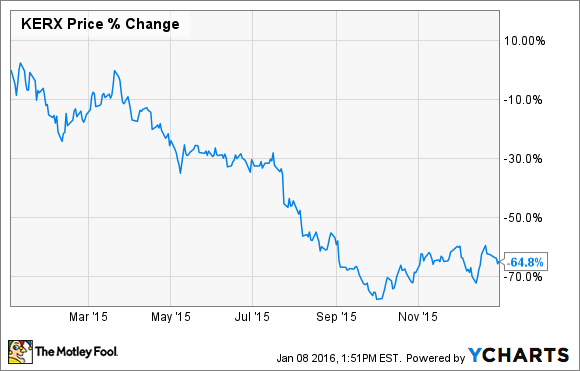 So what: The awful share performance for the year boils down to one reason: weak Auryxia sales.

Peak sales estimates for Auryxia were running as high as $1 billion in the U.S. alone, yet U.S. sales of the drug have reached only $5.3 million for the first three quarters of the year. That's a much slower start than analysts were expecting, causing Wall Street to turn bearish.

Management was quick to blame the slow start on reimbursement issues and general conservatism among providers, and the company is actively working on resolving both issues, but the market remains skeptical that Auryxia will be able to live up to its potential.

Now what: Despite the rough year, there are a few reasons to be optimistic about Keryx's stock prospects in 2016.

First, with its payer issues largely behind it, the company should be in a position to grow Auryxia script volume over the coming quarters. In fact, the company is increasing its sales force by 50% to help get the word out.

Next, Keryx has already won regulatory approval to sell Auryxia in Europe, where it will be known as Fexeric. While the company is still working on finding a partner, the opportunity in Europe looks huge, as Fexeric already is cleared for use in patients who are in both dialysis and pre-dialysis. That's a broader indication than Auryxia currently enjoys in the U.S., giving it a much bigger market opportunity.

Keryx's stock could also get a boost if it gets good news for its ongoing phase 3 clinical trial testing Auryxia in patients who are in the pre-dialysis phase. The company is slated to report top-line safety data in the second quarter of 2016, and if all goes well, it intends on submitting for approval soon after.

Finally, the company just received a large $125 million cash infusion from famed investor Seth Klarman's Baupost Group. That should give it all the capital it needs to get Aurxyia on the right track in 2016.

Make no mistake: Keryx remains a very high-risk stock, and it's important to remember that for it to be successful, it needs to wrestle market share away from Sanofi's (SNY 2.55%) Renvela. That's no easy task as Sanofi is on pace to generate roughly $1 billion in Renvela sales in 2015, with the majority of that coming from sales in the U.S. Since Sanofi is a much larger company than Keryx and it is currently dealing with big problems of its own, you can bet it's going to fight tooth and nail to defend itself.

Still, Keryx has done everything in its power to position itself for a successful 2016, so if all goes well then I could easily see its share price soaring in the year ahead.