Please ensure Javascript is enabled for purposes of website accessibility
Log In Help Join The Motley Fool
Free Article Join Over 1 Million Premium Members And Get More In-Depth Stock Guidance and Research
By Matthew DiLallo - Jan 14, 2016 at 8:44AM

A tough showing in 2015 might be only the beginning of the company’s troubles.

Halliburton (HAL -0.04%) had a rough 2015. Not only did the company spend the entire year trying to persuade regulators to approve its merger with Baker Hughes (BHI), but the energy sector also grew worse because of progressively weaker oil and gas prices. Those two weights could make for an even worse showing in 2016 if things don't go according to plan.

The rebound might not materialize
On Halliburton's third-quarter conference call, CEO Dave Lesar provided investors with the company's current outlook for a recovery in the oilfield-services market:

For the fourth quarter, there's a lot of uncertainty as we approach the holiday season. But we believe that customer budgets will reload in the first quarter, and anticipate activity to ramp up in the second half of 2016. Looking ahead, we're not going to try to call the exact shape of recovery. But we do believe that the longer it takes, the sharper it will be.

At the time he made these comments, oil was around $50 a barrel, which was viewed as being too weak a price for producers to ramp up oil and gas activities. Instead, the company saw oil companies waiting for better oil prices, which it thought appeared likely by the second half of 2016. It was a rather bullish view because it was the polar opposite view of rival Schlumberger (SLB -0.51%), which didn't see an activity rebound until 2017.

Given that oil prices have continued to fall since those comments were made, there is a growing possibility that Halliburton's outlook for 2016 is too bullish. In fact, with oil now in the low $30s it would have to nearly double to reach the point where Halliburton thought producers would begin to add rigs. The implication being that 2016 could turn out to be more in line with what Schlumberger is predicting, which would lead to much weaker margins and earnings than Halliburton is expecting to deliver this year and likely push its stock price even lower.

The Baker Hughes deal might not be approved
If the potential absence of a recovery wasn't enough, Halliburton is also facing stiff opposition from regulators in both the U.S. and EU over its pending merger with Baker Hughes. In mid-December, the company agreed to extend the time period for closing the deal to the end of this April in hopes of working out a solution with regulators that are worried that the deal will stifle competition. However, more recently, regulators in the EU opened up a full antitrust investigation into the deal because of "serious potential competition concerns," which could delay it even further. 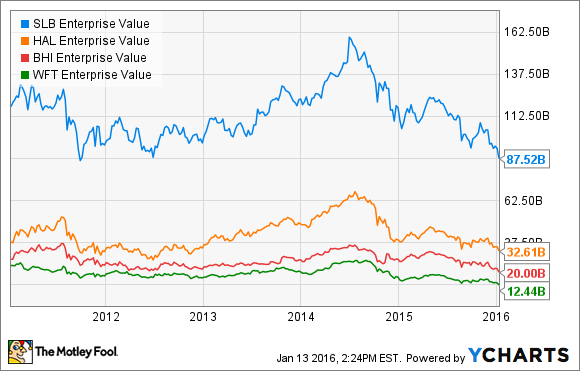 That said, Weatherford is by far the smallest of the group and has the weakest balance sheet. So should Halliburton and Baker Hughes merge, it would leave the sector with two very large players at the top and a big gap between the next tier. To address this gap, Halliburton and Baker Hughes have offered to sell a bevy of assets to calm the competition concerns. However, Weatherford was early to step out of the bidding because it doesn't have the financial capacity to make an acquisition that would make it a stronger competitor to the top two.

It's therefore possible that regulators will block the deal. If so, it would hurt Halliburton in a number of ways. First, it would have to pay a $3.5 billion breakup fee to Baker Hughes, which is 10% of the transaction value and well above the average breakup fee of 4% of the deal's value. Further, the company will have wasted significant time and resources on the deal, including the added costs it's carrying to support the deal, which last quarter alone would have resulted in a 400-basis-point improvement in its margins if it wasn't carrying these costs. Finally, if the deal is blocked, it would be a significant blow to the company's credibility and would put it further behind Schlumberger, which is near to closing a game-changing acquisition of its own. If this deal doesn't get done, it would be a huge blow to Halliburton.

Investor takeaway
The potential is there for 2016 to be a tough year for Halliburton if the recovery is delayed and its merger with Baker Hughes is blocked. But if the recovery does begin to emerge over the next few months and the deal goes through, then 2016 could be a really good year for the company. There's a lot of uncertainty in the meantime, which means that 2016 could be a very volatile year.

Matt DiLallo has no position in any stocks mentioned. The Motley Fool owns shares of and recommends Halliburton. Try any of our Foolish newsletter services free for 30 days. We Fools may not all hold the same opinions, but we all believe that considering a diverse range of insights makes us better investors. The Motley Fool has a disclosure policy.